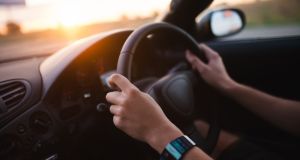 Emigrants returning to Ireland from a number of countries including the US currently have to go through the full driver learning process, which includes the driver theory test, a mandatory 12 Essential Driver Training (EDT) lessons, and the driving test. Photograph: iStock

The Government is to introduce measures to make it easier for immigrants and returning Irish emigrants with foreign driving licences to get back on the road when they move to Ireland.

Currently, drivers holding a full licence obtained abroad, which is not exchangeable for an Irish licence, must go through the full driver learning process, which includes the driver theory test, a mandatory 12 Essential Driver Training (EDT) lessons, and the driving test.

This has caused difficulties for Irish emigrants returning from countries which do not have a reciprocal driving licence arrangement with Ireland, particularly the US and parts of Canada.

A survey of 400 recently returned Irish citizens, published by Crosscare Migrant Project last year, found the cost of car insurance and tax, and applying for driving licences, were among the biggest challenges they experienced after moving home.

Under the new measures, drivers will have to do six lessons instead of 12 before sitting their driving test.

According to the Department of Transport, the new rules would maintain safety standards, while reducing the time and cost burden on immigrants and returning emigrants.

Minister for Transport Shane Ross said a number of lessons and an Irish driving test was necessary to “make sure that the people we licence to drive on our roads are qualified to do so”.

“A number of lessons will help people adjust to specifically Irish rules and make it easier for them to pass the test, but making them go through a complete 12-lesson programme designed for beginners does not make sense,” he said.

Crosscare Migrant Project, which provides information and support for immigrants and returning Irish emigrants, said it has been receiving a lot of queries from Irish people returning to live in Ireland from the US, whose licences are non-exchangeable.

“Often, these people have been driving for many years and are extremely experienced drivers with impeccable records. It comes as a shock when they find out about the 12 mandatory lessons,” said Crosscare’s information and advocacy officer Judy McAvoy.

“Apart from being an inconvenience, it is also quite a significant expense, on top of all the other expenses returning emigrants may face. We welcome the news that this expense will soon be halved for those making the move home.”

Ms McAvoy said the cost of car insurance was also a significant issue, with returning emigrants receiving very high quotes because many Irish companies do not recognise overseas no-claims bonuses.

It is currently possible to receive an Irish driving licence in exchange for one issued within the European Union, or in a number other “recognised” countries including Australia, New Zealand, Japan, and South Africa.

Under deals done by the Irish and Canadian local governments in recent years, Irish driving licences are recognised in six of the 10 Canadian provinces, and their licences recognised here. There is still no agreement in place for Alberta, Nova Scotia, Quebec or Prince Edward Island, however.

Holders of licences from countries not recognised, including the US, can only drive in Ireland for a maximum of 12 months.

For a full list of recognised countries, and information on how to exchange a licence, see citizensinformation.ie/en/travel_and_recreation/motoring_1/driver_licensing/exchanging_foreign_driving_permit.html