Living in Chile, a country deeply ill at ease in its inequality

Reading about Ireland from afar, I’m increasingly concerned it won’t be so different 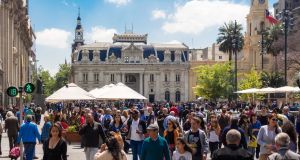 Es por la dictadura might as well be the national motto of modern Chile. Here, I have reverted to my three-year-old self, interminably asking why things are the way they are.

It comes from a place of equal ignorance, and equal curiosity. Before coming here I, as a gringo, knew just as much about Chileans as they did about us, which is to say less than we both imagined. I must ask why about everything, from the state of the postal service to the bewildering farce of ordering at a bakery, from the under-representation of indigenous peoples in public life to the inviolable supremacy of the avocado.

It doesn’t take much pushing or digging. The answer more often than not boils down to this: “es por la dictadura” - “it’s because of the dictatorship”.

Chile’s right-wing dictatorship was short by international standards - Augusto Pinochet was deposed following a referendum in 1990 after 17 years of rule - but it has proved indelible. His reign, like so many others in Latin America, was bolstered, if not straight-out contrived, by CIA interference. As a result, Chile became and still is a demonstrably free-market capitalist country.

It should be much richer than it is - it has a small population but an abundance of resources, but these were privatised by Pinochet and now Chile sees precious little of the wealth it possesses.

This relentless private enterprise model is the first thing you notice, and it is hard to forget. Everything is worth something and you probably can’t afford it. Especially if you aren’t rich, and the likelihood of that is higher than in most “western” countries: Chile consistently ranks as one of the most unequal countries in the world in terms of income.

This is visible. Today I took the metro from Las Condes, one of the wealthier areas of Santiago, where I counted four Range Rovers pass me at a single traffic light; on the metro itself, an equal number of people tried to sell me bandages for almost nothing. If you can pay for an education, you can get one. If you can pay for a hospital visit, you will be cured. If not, you are uneducated and you can expect to die significantly earlier than you might wish.

Many Chileans refer to their country as an island. It is, like many countries in the post-colonial world, an invention, an arbitrary section of a continent. But it has a clean border the stuff of Trumpean dreams: 4,000-odd kilometres of titanic mountains on one side, the same of ocean on the other, desert at the top, icebergs at the bottom.

An island mentality has followed suit. An Irishman can tell - there’s the inferiority complex, the acknowledgment of, and resistance to, not really mattering on the world stage. Colonial subjugation did its inimical work. Recent movements to liberalise restrictive abortion laws and to legalise gay marriage are also unmistakable parallels, and they are indicative of a society whose attitudes are changing rapidly.

Chile now has a full generation of young people born completely outside of a dictatorship; Ireland’s emergence from under the thumb of the church is less neat, but it is comparable. Our young people want to define their respective countries outside of the restrictive parameters that they inherited.

It is messy - every single Chilean I have asked has either been unable to characterise what a Chilean is, or has used completely contradictory adjectives to describe one - but this is an inevitable part of the process.

However, like the church in Ireland, the dictatorship still lurks. Inequality is one thing, and there is real poverty here. People with good jobs, who in Ireland would be living relatively comfortably, still struggle with an economic model that is every bit as unforgiving and ruthless as it was under the previous regime.

But also, less tangibly, the caricature of the South American does not apply here. The eternally dancing, beaming optimists in loud colours and constant carnivals are elsewhere. The dictatorship was successful in its suppression, and it brought about a reserved, stoical, cool people. In many people’s minds those times are long gone, and you can stay out late at night and say pretty much whatever you want on TV, but in certain contexts it is difficult to escape the sensation that in many ways, Pinochet still won.

Reading, from here, about the homelessness crisis in Ireland, the lack of affordable housing, the unaccountability of the banks, the chaos that is the health system, and the creeping injustice that has begun to appear in areas of life that were once, and should always be, completely democratic, it is easier and easier to see Chile as a kind of harbinger. We may think of second or third world countries as having been handicapped from the start, unlike us, but we are just as susceptible to the vices of globalisation and individualism.

I am currently living in a country which is deeply ill at ease in its inequality. If I go back to Ireland, I am increasingly concerned that the move from here to there will not be so remarkable.

David Nash is an Irish poet and teacher working between Santiago and London. A book of poems and illustrations about the islands of Chile is forthcoming in 2019. davidnashpoetry.wordpress.com

‘If something happens to me, what will happen to my girls?’
3

‘Life is busy . . . this can be difficult for a new vegetarian such as me’
Real news has value SUBSCRIBE