Christmas reunions at Dublin Airport: ‘I’m so glad to have the family home’

Family and friends greet loved ones with Santa hats and homemade banners as they arrive in Dublin Airport. 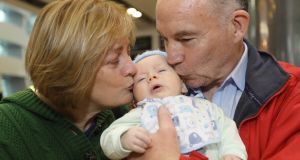 Mary and Bruno Byrne from Knocklyon meet their grandson Oisin (4 months) for the first time after he arrives back from Boston for Christmas. Photograph: Lorraine O’Sullivan/The Irish Times

Grandfather Bruno Byrne met his baby grandson for the first time when his daughter Fiona returned home from Boston for Christmas.

Four-month-old Oisin burst into tears, as did Grandma Mary, as her husband took hold of the baby in the arrivals lounge in Dublin Airport early on Friday morning.

“I’m shaking,” said Mary Byrne, as she looked on at the special moment. “I’m just so glad to have the family home.”

The Byrnes will be spending Christmas together in the family home in Knocklyon in Dublin, along with the Boston in-laws.

Terminal 2 was awash with Santa hats and homemade banners as bleary-eyed travellers made their way through the arrival gates.

“Me and Mammy made the banner,” Cerys said, holding up a two-metre wide sign complete with Santa stickers and colourful stamps. “I did the ‘H’ letter and the heart stamps, and those are all my stickers,” she added.

Kitted out in reindeer antlers and mask, Edele Murphy craned over the barrier to catch a first glimpse of her sister Aideen Scally.

Scally arrived back with her daughter Amy (7) and son Adam (6) from Boston, where her husband works for the service station company Applegreen.

“This is just our second year away,” said Scally. “So we cannot wait to see the family and catch up with everyone.”

The Scally and Murphy families will be spending Christmas together with all the cousins in Celbridge, Co Kildare.

Screams echoed around the airport as the O’Reilly sisters embraced. Helen flew home from London in time for Siobhan’s 30th birthday in Waterford.

“I don’t know why I’m crying,” said Helen, “We saw each other a month ago, but it’s just really emotional being back.”

Others from London were glad to be home after rogue drones in Gatwick airspace grounded numerous flights on Thursday.

“We were supposed to come in yesterday, but there was nothing taking off from Gatwick and all the other flights were gone,” said Claire Mehrai, who was travelling with her children Lila (5) and Dominic (3).

“I spent £900 on new flights from Heathrow because I had to get to a wedding in Athlone today. Hopefully, I’ll still make it.”

Keen to get away from the damp drizzle outside, Niamh O’Donohue (25) and Jake McCabe (25) were heading off to Bali to spend Christmas “drinking beer in shorts on the beach”.

“We wanted to surprise the family by not being around for Christmas,” O’Donohue said. “Mam wasn’t too pleased when she heard about it.”

William and Samuel Godfrey, aged nine and seven, were up since 4.30am to fly to Lapland.

“We need to check that Santa is coming to Ireland,” said their father, Eric. “We have to be as good as gold on the plane to make sure that he comes to visit us on the 25th.”

Also hoping that Santa remembers to deliver to Ireland were Ronan and Fiona Prince, aged seven and 10, who are visiting their grandma and grandad. The Prince family had a long flight from Idaho, and were looking forward to napping on the car journey to Belfast.

Grandma Heather Hill hardly stopped hugging the children as she said: “We’re delighted to have them home. We miss them so much.”

The Pendergrass family will be spending their first Christmas together for the first time in nine years. Dawn Pendergrass works in recruitment in Halifax, Nova Scotia, and is home with her partner Chris Leonard to enjoy some of her father’s cooking.

“We’re so delighted to be home,” said her father, Frank. “It’s just unbelievable to have the whole family together.”