James Joyce, the emigrant who left Dublin in body but not in mind

Joyce never set foot in Ireland again after 1912, despite living for another 29 years 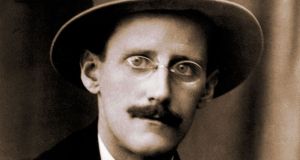 As Bloomsday approaches, it’s worth remembering that Ulysses, the most famous literary evocation of Dublin city, was written by a man living many miles away from home.

James Joyce’s relationship with Dublin - and Ireland - was complex. After 1909, he never lived in Dublin, and after 1912 he never set foot in Ireland again, despite living until 1941.

Like any emigrant, his reasons for leaving (which will be explored during a Joycean-themed tour of EPIC The Irish Emigration Museum in Dublin this Friday, see below for details) were both deeply personal and reflective of broader societal trends.

Firstly, he needed to find work. He had dropped out of medical school in Paris in 1902, before he returned to Dublin and had a brief brush with a potential career in singing. He won bronze at the 1904 Féis Ceoil, but might have taken the gold had he not refused to participate in the sight reading challenge - perhaps embarrassed by his already worsening eyesight. Soon afterwards, he and Nora Barnacle left for Zurich.

After this move, Joyce’s life intersects with different emigrant experiences in interesting ways. Like many recent Irish emigrants, he made a living teaching English abroad, first in Pola and then in Trieste.

He missed his family and lured a number of his siblings to the continent, with varying degrees of success. His sisters Eva and Eileen came to live with the Joyce family in Trieste in 1910 and 1911 respectively. Eva returned to Dublin, but Eileen remained on the continent for the rest of her life, marrying a Czech bank cashier. In 1915 as the first World War led to rising tensions in Trieste, Joyce’s brother Stanislaus, then living there with the Joyce family, was interned for demonstrating pro-Italian sympathies.

Of course, Joyce’s personal reasons for leaving Ireland are chronicled in his work, mostly through the figure of Stephen Dedalus and his formative journey through the books A Portrait of the Artist as a Young Man and Ulysses. Some of Joyce’s most famous critiques of Irish society can be found in these works, where he decries Irish society’s conservatism, pietism and blinkered nationalism:

“ - Do you know what Ireland is? asked Stephen with cold violence. Ireland is the old sow that eats her farrow.” - A Portrait of the Artist as a Young Man.

Joyce’s struggle with Ireland’s religion is also prevalent. Art imitates life in A Portrait of the Artist where Stephen tells his friend Cranly of his refusal to kneel at his mother’s deathbed and pray - an event taken from Joyce’s own life, and one that clearly affected him.

The hypocrisy and dangerous zealotry of Irish nationalism is also critiqued in Leopold Bloom’s encounter with the Citizen in Ulysses, where the well-meaning and tolerant Bloom is contrasted with the narrow-minded Citizen and his nationalistic friends.

Censorship also played its part in keeping Joyce from Dublin, especially after the torturous process of trying to have Dubliners published by Maunsel & Co. in 1910-12, with publisher George Roberts holding up publication again and again for fear of reaction to what he perceived to be the stories’ “obscene” and “anti-Irish” content.

Although he couldn’t bear to live in Dublin, Joyce’s spiritual and artistic engagement with the city continued until the end of his life. While in Paris, although he was surrounded by exciting contemporary writers like Marcel Proust, Ernest Hemingway, Samuel Beckett, Ezra Pound, TS Eliot and WB Yeats, Joyce’s favourite pastime was to seek out visitors from Dublin and ask them to recount the names of the shops and pubs from Amiens Street to Nelson’s Column on O’Connell Street.

Joyce’s final work, Finnegans Wake, engaged with the music of Dublin language like no book before or since. (At EPIC The Irish Emigration Museum in Dublin, you can hear Joyce recreating the cadences of a Dublin washerwoman, in a 1929 recording of the Anna Livia Plurabelle section of Finnegans Wake.)

Although Joyce left Dublin, it would never leave him during the course of a life spent thousands of miles away from home.

Jessica Traynor is museum curator at EPIC The Irish Emigration Museum at the CHQ in Dublin.

EPIC is running a Joyce-themed tour of the exhibition on Bloomsday, June 16th, with readings from his works by actors Margaret McAuliffe and David Fennelly. The 90-minute tours begin at 11am and 3pm, and cost €14 (the usual entrance fee to EPIC). To book tickets see epicchq.com/event/bloomsday-joyce-emigrant-tour-epic/