‘It’s face-meltingly hot’: Irish in Australia on the ongoing heatwave 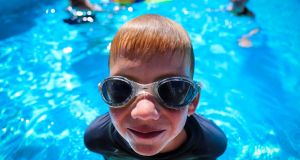 Ted Felton: ‘Even the smallest provincial town has a half-decent pool. Here’s our six-year-old, Robbie, at the Avoca pool in the Victorian Goldfields, a couple of hours northwest of Melbourne.’

South Australia was one of the hottest places on Earth this week, with record-breaking temperatures approaching 50°C in some parts. Around 200,000 people were left without electricity after demand for air-conditioning blew the power supply, and wildfires are burning across Tasmania. Tradesmen are being encouraged to take the week off work in Sydney to avoid labouring under the hot sun.

Irish readers living in Australia have been sharing what it is like where they live with Irish Times Abroad.

Gerald Faulkner: ‘The flies are as bad as the heat’

Our temperatures have risen to the crazy 40s, with night-time temps of around 22°C. Work begins and ends earlier than you’d be used to in the Northern Hemisphere. We start at 6am, just as the sun comes up, that red-wine rusty orb on the eastern horizon, tantalizing and beautiful in the chill of a summer’s morning at 20 degrees. By 10am, it’s starting to fry. There’s no reprieve. No let-up… just bloody hot mate. The flies are as bad as the heat. Camellia leaves are rubbed into the skin to stave off the flies. Billabongs are evaporating. Rivers have already dried up. The fish are dying due to a lack of oxygen and, jeez, it’s hot.

Roll on the southerlies, the winds that blow in off Antarctica. They are a blessing. “Southerly busters “, the Aussies call them. They are nature’s air-conditioning but for weeks and weeks, we’ve had none. We are on level 2 water rationing at the moment, which means no garden sprinklers, no car-washing (except with a bucket), and the birds trip about with their beaks open and their wings extended, in a benign effort to chill themselves. Meanwhile, we humans seek out air-conditioning in pubs, shopping malls and cinemas, to escape the heat, and the flies!

My Irish ancestors arrived as free settlers in 1842 from Ahascragh, Co Galway and, despite being sixth-generation Australian, I can’t bear this heat. When it’s in the mid-40s, being outside in the blazing sun is like being surrounded by hair dryers on full bore while in a furnace. The weather has definitely become hotter over the years. And drier. An air-conditioner is essential in summer.

Thomas Shaw, Queensland: ‘We haven’t had rain in months’

The heat has been fierce. We have been melting. The weather here is getting warmer. Usually at this time of year we have afternoon thunderstorms and heavy rain just about every other day. But we haven’t had rain in months. None so far in 2019.

Having recently moved to Melbourne, my girlfriend Roisin and I joined St Kevin’s GAA club and have been adjusting to pre-season training in the summer. Last Thursday night we trained in almost 40° heat; it wasn’t long until we were in for a swim on Elwood beach! We enjoy everyone’s heatwave stories; it certainly beats complaining about another Atlantic storm moving in over Cork or Donegal.

Finbarr McCarthy: ‘The humidity is brutal’

It’s 9am and it’s 32°C, heading for 36ish by noon. We’ve got people coming over for lunch and our dog Boris won’t get out of the pool. The humidity is brutal and the air-conditioners are struggling. Way back in 1990, consecutive days over 35°C were rare, but now, heat records are broken almost annually. Here in eponymous Caves Beach, the sea breeze helps, but I envy my Dublin family who have returned to 7°C and proper winter weather. Make no mistake, climate change is here and the heat is rising. The only thing to do is go to the beach or jump in the pool.

It’s 9am in Sydney and already face-meltingly hot. I’ve put the kids in a cool bath with toys and filled the kids’ waterplay table out the back yard - not for them, it’s too hot! - but for native birds and lizards to drink from. We had planned to go see some of Saturday’s Australia Day events but they were mainly outdoors, so we chucked it all in and went to a museum with air-con.

Hilary Farrell Naik, Melbourne: ‘The summers have got hotter each year’

Since coming to Australia in 1990 the summers have got hotter each year. We used to use our air-conditioner a few days a year in the early years, but now use it most days and nights. Our winters have become colder and our summers hotter. Now that I’m a lot older, this has become hard at times.

I just arrived in Sydney having lived in Dubai for the past six years. The weather is really nice here. Yes, it’s warm, but there is a lovely breeze and compared to the Dubai heat it feels nice and balmy!

Anna Porter, Melbourne: ‘I’m trying to learn to like the heat’

I moved to Melbourne from Dublin in June. When people say the weather in Dublin changes fast, it’s nothing like here. It can go from 40°C to 22°C in the same day. I’m a rain and boots kind of person, but I’m trying to learn to like the heat when we get it here. People at home freak out when they hear how hot it is, but you get quite used to it. It’s certainly uncomfortable at times but it’s a common occurrence so you still have to go to work, and live life. When it gets to the 40s though, it is a little sweaty; I took an ice pop with me when I left the house today.

In recent days in Melbourne it reached at least 41°. When you step outside from a property with air-con the contrast is comparable to when you open the door of your oven to check your food. Except the initial blast of hot air doesn’t subside, it carries on in perpetuity. I had to bite the bullet last week and get shorts and sandals; my usual black chino and desert boot attire had become untenable. I love the climate here, but you air punch on one of those extremely rare days when it’s rainy or dull. Maybe I haven’t managed to move on from Ireland completely.