We almost bought a flat in London before the vote. So much has changed since 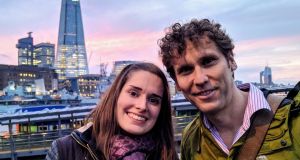 ‘Just before the Brexit vote, my husband and I had almost bought a flat. We were planning to put proper roots down in London, after living here for nearly a decade.’

“Sounds like a great decision; I wish I could do that.”

“Getting out before Brexit, eh?”

I have handed in my notice at my job in London to move back to Ireland and, despite my apprehension about telling my colleagues, nobody seems in any way surprised. I have an EU passport, no children in English schools, or property to shift in an increasingly flaky market. Brexit is looming around the corner. Why would I stay?

I woke up early on the morning of Friday June 24th, 2016 to two serious bits of news. One, as I discovered upon checking Twitter, was that the UK had voted to leave the EU. I was just exclaiming my disbelief when my phone interrupted with the second bit of news - an unexpected call from my mother to say that my grandfather had died. I answered saying, “I guess you’ve heard the news then!” which as you might imagine hugely confused her until she realised I was talking about the Brexit vote.

What followed was a rather bizarre day spent at home in front of BBC News 24, mourning my grandfather while watching the reactions to Brexit roll in. I remember Nigel Farage admitting that leaving the EU probably wouldn’t mean £350 million for the NHS after all. I watched live as David Cameron morosely exited 10 Downing Street to resign, looking like he had been slapped in the face. I stared, eyes agog, at Jeremy Corbyn on Parliament Green demanding for Article 50 to be triggered immediately, to give the people what they want. I felt a bit sick.

The next morning I flew back to Ireland for my grandfather’s funeral. The guard at border control in Cork airport was pretending to refuse entry to anyone with a British passport - “don’t you need a visa now or something?” My whole family had the same question: “What will happen next?”

We were planning to put proper roots down in London, after living here for nearly a decade.

I can tell you what didn’t happen next. Just before the Brexit vote, my husband and I had almost bought a flat. We were planning to put proper roots down in London, after living here for nearly a decade. There were issues with the property that made us think twice, so we pulled out and decided to recommence our search after the referendum, when all the Brexit nonsense was over and the UK’s future was looking certain again. We didn’t buy a home.

Very little has happened politically at Westminster since 2016, because Brexit, like a toddler (or a Ukip supporter) throwing a tantrum, demands everyone’s attention at the expense of everything else. It is the ultimate distraction from social problems that aren’t going away.

The political is so often personal, and especially so for people in poverty, living with long-term health conditions or disabilities, or - as is increasingly common in London - sleeping on the streets. I know, as a charity campaigner advocating for vulnerable groups, that the current political situation offers little comfort for such people - if they didn’t feel listened to before the Brexit referendum then they certainly don’t feel listened to now.

There is a lot of ignorance about Ireland in this country, that’s for sure

I was lucky to arrive in London at the height of Irish-UK relations. I had a lump in my throat watching the Queen visit Cork’s English Market in 2011. “That’s my city,” I told colleagues. “That’s where I’m from.” It would be a lie to say that I’ve never experienced anti-Irish sentiment - of course I have. But in general, my Irishness has not been much cause for comment.

There is a lot of ignorance about Ireland in this country, that’s for sure - but it is truly maddening to see this ignorance turn into contempt in response to the latest Irish question to frustrate UK policy. The pesky Irish “should know their place”. Why doesn’t Ireland leave the EU as well - surely they should respect their special relationship with Britain over the EU? What part of Ireland is “ours” again? I could go on, but really, I’d rather not.

Brexit isn’t going anywhere. So we have to go instead. This is the conclusion that my husband and I have ultimately reached after much reflection and debate that began on June 24th, 2016. My grandfather died that morning, and I will always remember it for that reason. But something else died too - my future in London. And I’ve spent long enough grieving for that.

What will happen next? Your guess is as good as mine. But I like to think that whatever is around the corner for us at least, it’ll be a whole lot better than living in Brexit Britain.

Why do we feel sicker at night?
Real news has value SUBSCRIBE