How Irish passports became essential in the battle against Brexit 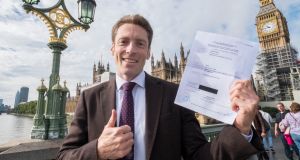 He never contemplated being Irish. Not until Brexit loomed. The vote to leave the European Union in last year’s referendum shocked Simon Scotting. For the first time, it made him think about becoming Irish.

The London-based financial services executive (37) knew his grandmother was born in Northern Ireland. Derry-born Margaret Scotting (née Robson) gives him an automatic right to Irish citizenship. He does not remember her – she died when he was two – though he has photographs of them together.

“You’ll have to teach me how to be Irish,” he jokes, now that he has secured the paperwork making him a citizen of the country.

The passport will be Scotting’s fourth. He was born in the US to British parents. He lived for a time in Canada, so he holds American, British and Canadian passports. After the Brexit vote, he wanted to remain an EU citizen. Some relatives investigated a Portuguese family connection, but he embraced his Irish roots.

Most importantly for Scotting, his Irish/EU citizenship provides certainty, because he does not know how his life and business will be affected by Brexit.

“I took out Irish citizenship almost as an insurance policy so that I can live anywhere in Europe, ” he said.

The international nature of his business makes EU citizenship critical to his work.

“At the airport I will wait to see which queue is short and then decide which passport I will use,” he said. “For me, it is a bit of a fluid thing.”

Scotting wishes he had known about the possibility of passing on Irish citizenship to his children before they were born, but then he did not foresee Brexit.

“I never thought Britain would make such a dumb decision,” he said.

Aware that his brother’s wife in Detroit is expecting, Scotting has sent all the required paperwork to his sibling so he can apply for Irish citizenship in time to pass it on automatically to his child.

“Would I describe myself as Irish now?” asks Scotting, who sees himself as British-American. “No, I wouldn’t. It would be ridiculous for me to do so. I have been there twice in my life.”

The American-born British-Canadian Irishman is one of many new Irish citizens.

New figures provided by the Department of Foreign Affairs show a surge in first-time passport applications to the Irish Embassy in London since the Brexit referendum in June 2016. The number more than tripled from 4,086 in the first half of 2016 to 14,177 in the second half of the year. Applications rose again in the first half of this year, to 15,421. The figures are in line with an overall increase in the volume of all applications.

The number of “foreign birth registrations” through which a person with a grandparent born in any part of Ireland can apply for Irish citizenship – the so-called “Irish granny rule” that allowed Scotting to qualify – has soared in the UK, from 1,166 in the first half of 2016 to 1,303 in the second half and 1,865 in the first half of this year.

There has never, the figures would suggest, been a more popular time to become an Irish citizen. Overall, the passport service has seen a 14.8 per cent increase in applications in the year to the end of August, and it is on course to receive about 800,000 applications for Irish passports this year, the most ever in a year.

Fiona Penollar, head of passport reform at the service, attributes the increase to the economic upturn and increased levels of foreign travel, demographic changes and the use of the passport as an identity document.

Another factor skewing the increase, she says, is that this year marks the 10-year anniversary since biometric passports were introduced, so many people have been renewing those passports for the first time.

The department has estimated that there are 1.73 million Irish citizens living outside the island of Ireland, but this does not include many people who may be entitled to Irish citizenship through descent. In the decade to 2016, almost one million passports (including renewals) were issued outside the State.

In the year to the end of August, London accounted for the highest number of passport applications submitted outside Ireland, with 55,392, followed by the US with 14,717 and Australia with 8,075. More passport applications have been received in the UK so far this year than during the whole of 2015.

Dan Mulhall, until this year Irish Ambassador to London, described the increase as “an extraordinary number” and said that it was due to people attempting to “safeguard their position in future” in light of Brexit.

Applicants include pro-EU Conservative MEP Charles Tannock, who obtained an Irish passport through his Dublin-born grandmother. His interest in his Irish heritage was “awakened by Brexit because, to be honest, I am quite ashamed to be British in many ways”.

The applicants include other unusual candidates.

“Interestingly, what I find quite amusing is that lots of people who are Northern Irish, who historically would never have done so, have applied for an Irish passport,” said London-based businesswoman Liz Shanahan, a board member of the Irish International Business Network.

She knows a number of people who voted for Brexit and who have since applied for an Irish passport to avoid restrictions on travel or property ownership in Europe or to ensure their children can work in the EU.

“It is really two-faced – people who voted for Brexit recognise the benefits of having a European passport,” said the Kerry-born entrepreneur. “I know probably three and that is just out of a small cohort in London.”

The flood of Irish passport applications raises questions about whether Irish citizenship is being devalued by those who see it as a badge of convenience to retain their European citizenship, rather than an expression of their Irish heritage or their desire to be Irish. However, the Government fundamentally disagrees with such an interpretation.

Ciarán Cannon, Minister of State for the Diaspora, says that there are “perhaps a tiny percentage” who are seeking Irish passports to move freely throughout the EU.

“[For] the vast majority of people who use those passports it means a bond, a link, a symbolic link with Ireland – some of whom have never set foot in Ireland,” he said.

Cannon pointed to the Government referendum on extending voting rights in presidential elections to citizens abroad – confirmed last month as taking place some time in June 2019 – as a recognition of the value of the diaspora.

The Government has not yet decided to whom voting rights should be extended.

“It may be to those people who are entitled to Irish citizenship or it may be a little bit further,” said Cannon.

He challenges the view that the Irish nation should be “confined to a little island on the edge of Europe” and sees the growing numbers of Irish abroad as a “massive asset” and “a very valuable opportunity”.

“I don’t see it being an issue at all – that somehow people are casually applying for it [a passport] because it is a handy thing to have. I think it goes much deeper than that,” he said.

Bronwen Walter, a professor of Irish diaspora studies at Anglia Ruskin University, cautiously estimates that there are about six million people in Britain who are entitled to an Irish passport by way of an Irish grandparent, but that only a small proportion of these are likely to apply by the time the post-Brexit rush tapers off.

“They wouldn’t necessarily feel Irish or wouldn’t be so strongly committed. I think it is a much smaller proportion of people that will apply,” she said.

She doesn’t believe that Ireland’s citizenship rules are too generous.

“I think it is very reasonable that people who identify as Irish should be allowed to retain that,” she said.

Conor O’Neill, a founding member of We’re Coming Back, a campaign that supports voting rights for emigrants, says there are always inconsistencies and trade-offs within citizenship rules.

He believes an inclusive system of citizenship is important for a country like Ireland with a long tradition of emigration and that it is a positive if Brexit opens up a wider debate about what Irish citizenship now means.

“When we think about citizenship, I would rather a generous system that might see someone undeserving benefit rather than a highly restrictive one that would lock others out,” he said.

“I would be more worried about this recent glut in applications for passports . . . leading to knee-jerk reactions and a very restrictive, closed system of citizenship.”

That appears unlikely, given the Government’s position, and so, post-Brexit, the flood of new members to the “global Irish” looks set to continue.

Last week, Simon Scotting received his Irish passport in the post from the Embassy in London and was contemplating citizenship of a fourth country.

“It seems strange to think of myself as Irish,” he said, “but if this is how I can remain a European citizen, I’m looking forward to being Irish.”

Have you recently become an Irish citizen, for reasons similar to those discussed in this article? We want to read your story. Send us an email to abroad@irishtimes.com (max 400 words) telling us about your reasons and plans. Please include some information about yourself, including where you are from originally, your age and occupation. A selection may be published online and/or in print.