How Irish influencers are securing ‘extraordinary ability’ visas for the US

Instagrammers and YouTubers are getting O-1 visas, usually for high achievers in sport or arts 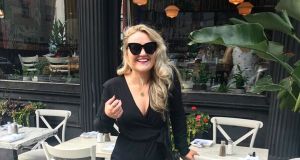 Stephanie O’Quigley moved to the US on a J-1 visa in 2016. She now works in PR in Manhattan.

There are already many perks to being a successful social media “influencer” – sponsorship, profile, not to mention lots of free stuff – and now there’s another: access to the most covetable working visa in the United States, the O-1.

The O-1 visa has been open to applicants with “Extraordinary Ability or Achievement” since the 1990s. Those who excel in the sciences or athletics can apply for the O-1A category: Nobel Laureates, academics, and sports stars, including some basketball and ice hockey heavyweights playing in the country’s top tier leagues. The O-1B category is for those excelling in the arts; Canadian-born singer Justin Bieber held one of these, for example, before his marriage to Hailey Baldwin.

An O-1 allows you to stay in the US to work for three years, after which you can renew it on a year-by-year basis. Unlike the H-1 visa for graduates in specialised occupations, you don’t “belong” to any one company or authority while working on it. The O-1 is a solo visa, and as such, eminently desirable for self-employed “influencers”.

The eligibility criteria for an O visa can be overwhelming and confusing, and as any immigration lawyer will tell you, your application will be greatly helped by an Emmy, Oscar, Grammy or Tony nomination, an Olympic medal , or a Nobel Prize.

For the rest of us, the scope of the O-1 visa in fact goes way beyond what’s listed on the Citizen and Immigration Services website. Architects, writers, and other skilled Irish have been recipients of the visa in recent past; 2,364 Irish have successfully applied since the visa was introduced in 1990.

In recent times, “influencers” who have distinguished themselves on YouTube, Instagram or other social media platforms are also being granted O-1 visas, including a number from Ireland.

The difficulty with the O-1 lies in discerning whether or not you have the “extraordinary ability” that immigration officers are looking for, and whether you’ve the stamina for the application process. Immigration lawyers have been fumbling in the dark since Donald Trump’s White House entry, because the rules of the visa are constantly changing.

The application process however remains roughly the same. Before you apply, you have to consult an immigration lawyer, who can usually tell you straight away if you’re eligible or not. Then, it’s up to you to gather supporting documents and proof of your “extraordinary ability”. There needs to be sufficient evidence that you are, in fact, excellent at what you do, which can come in the form of sworn statements by eminent peers, press clippings, or a pretty portfolio. It’s up to you as a candidate to show you’re worthy.

But the decision to apply isn’t taken lightly, especially given the monetary onus on the applicant. Between lawyer fees and the application fee itself, the whole process can cost anywhere between $4,000-$6,000. This includes an application fee of $460, a trip to the US embassy for $190 and an optional $1,410 for premium or express processing, so applicants know within a month whether they have been successful or not.

Influencers, applying in the O1-A category, would typically need (with the application), a recommendation or “petitioner” that can vouch for the need for their presence in the US. In some instances, this petitioner could be the influencer’s “agency”, or it could be a company they’ve worked with previously.

On top of that, they need to show the array of work that deems them extraordinary within their industry. Whether this is the calibre of brands they’ve worked with, or the amount of followers they have, everything they have done to further their career has to be packed into the application, making it as robust as possible.

These three Irish Instagrammers and YouTubers were all early entrants to the Irish influencer scene; their large online following led them all to successfully secure an enviable O-1 visa.

Tara Marzuki (25), who began her career online as a YouTuber (Tar Mar) six years ago, has amassed a following on the video-sharing site of 114,000.

The Cork native, who studied fashion in Belfast School of Art, first arrived to the US on the graduate visa before applying for the O-1. After working for a time, she decided to dedicate her working hours to vlogging her day-to-day life in Manhattan, creating fashion lookbook videos, and shooting content for her Instagram page (@TarMarz).

“Two videos a week and a few Instagrams doesn’t sound like much but it’s an incredible amount to manage at a high quality level,” she says.

She admits she was fortunate when applying for the visa. Her mother had kept all press clippings mentioning her daughter over the years. These, coupled with her extensive work on behalf of big brands online, amounted to a chunky portfolio.

“Having recognisable brands on my application I felt really enforced everything, especially working a non-conventional self-employed job,” says Marzuki, who has worked with clothing company Century 21, millennial make-up brand Glossier, and Uber’s biggest US competitor, Lyft.

As much as she has enjoyed her time on the O-1 visa so far, Marzuki is adamant she won’t be renewing it, describing the application process as “the most anxious time of my life”.

“I know I will be ready to move on to the next chapter when my visa ends in another year and a half.”

Stephanie O’Quigley (26), who first rose to social media prominence while blogging her five-stone weight loss back in 2012, might also be recognised for her lengthy stint as Cocoa Brown’s marketing manager during the self-tanning brand’s ascension to the international beauty stage.

O’Quigley moved to the US on a J-1 visa in 2016. Currently serving Manhattan PR firm Pierce Mattie as a senior account executive, she works with a number of beauty brands including Paula’s Choice. It was her blog (stephanieoquigley.com) that led her to apply for an O-1, having blogged about everything from fitness to beauty, fashion, New York living, books and everything in between.

After assessing her existing portfolio, O’Quigley’s attorney helped her to build it up, to include documentation of events she had spoken at, published content, and proof of sponsorship from brands she had worked with. Pierce Mattie acted as petitioner to support her application.

The process was lengthy and exhausting, she says, taking six months in total to complete.“I get into ruts of working 12 hour days at the office,” she says, describing how she has less time now to devote to blogging and Instagramming, which worried her when applying for the O-1.

“I felt like I had a 50/50 chance of getting approval,” she says. But it was worth it in the end, when her O-1 visa came through. “I never thought my young career would be acknowledged like this, or that I would be worthy.”

Known to her online followers as RetroFlame, Erika Fox (27) has been in New York the longest of these three women, having moved over permanently four years ago. After several summer internships in Manhattan while studying for her degree at NUIG, her decision to move full-time to New York came during the Obama administration, when visas for foreign-nationals were decidedly less testy subjects.

With her blog archive (retro-flame.com) extending back to 2011, Fox was one of the first recognisable fashion bloggers in Ireland. While she attracted attention from local press at the outset of RetroFlame, it was her move to New York that resulted in increased media attention both in Ireland and abroad. In time, this led to better contracts with brands. In March 2016 she quit her job as a social media manager for fashion brand Vince Camuto (who had sponsored her for a H1-B visa) to go out on her own and apply for the O-1.

With her application supported by an influencer agency, American brands actively seeking to work with her on campaigns, and a portfolio of impressive press clippings, she received the visa in March 2016. A few months later, her sister Kaelin joined her in New York under the O-2 visa programme, which was created for aides or assistants to those on the O-1.

“My Irish followers have been with me over the past six years and have stayed so, so loyal,” says Fox, who on her last few trips home has appeared on the Ray D’Arcy Show, and judged the best-dressed competitions at both the The Dublin Horse Show and The Rose of Tralee.

“I’m so lucky to still have them! I think being in New York is definitely an advantage as it sets me apart a little bit from the rest.”