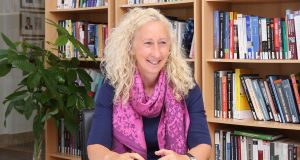 Dean of Globe Business College in Munich, Dr Susan Walsh. ‘I had the vision of creating a third-level business college in Munich that combines the Irish and German approaches to education,’ she says. Photograph: MM Photography

A chance encounter on a night out in Dublin brought Susan Walsh to the foothills of the Alps, where she set up a business college.

Originally from Greenhills in Dublin, Walsh worked in Bank of Ireland in Stephen’s Green after completing her Leaving Cert in 1987.

“I worked at BoI for a number of years in the marketing department, also doing a marketing diploma at the Technological University in Dublin in the early 1990s.”

After being promoted to their Belfast office, where she worked in the credit department in Donegal Square, Walsh decided to branch out academically.

“I completed a masters in marketing at the University of Ulster in Jordanstown, after which I was offered to do a PhD. It wasn’t on my agenda, but Bank of Ireland sponsored me, which was fantastic.”

Walsh spent four years working on her PhD in marketing full time, completing it in 2001.

“I focused on online banking, which was in its infancy at the time and deregulation and used BoI as my case study for my doctorate.” Upon moving back to Dublin, she took on a fellowship at DIT, researching and lecturing marketing students.

“During that time, I walked into Café en Seine on Dawson Street one evening and met my now Bavarian husband. That’s how these things go.” After much back and forth between Munich and Dublin, she finally moved to the southern German city in 2004.

The location, she says, is second to none. “We live south of Munich, close to the lakes and mountains you see in the chocolate box Germany brochures. You can go hiking in the Alps or Italian Dolomites in summer and skiing in winter. We’re in the heart of Europe here. It’s fantastic.”

In 2006, after settling into German life and learning German, Walsh decided to set up her own business school.

“I had the vision of creating a third-level business college in Munich that combines the Irish and German approaches to education. We partnered with Griffith College in Dublin, so when our students complete their BA, they come over to Ireland to graduate. So we offer an Irish degree – a BA in business studies, which is accredited by the Irish Government – but are located in Germany where the degree has full acceptance.”

The degree is taught in English and focuses not just on the theory but also developing the skills and competence of students through role-play-based assessments, personal coaching, guaranteed internships/work placements and mentoring.

“Ireland and Germany couldn’t be more diametrically different, but combining the country’s approaches is hugely beneficial and you get broad life and work skills,” she says. “It’s a fantastic combination.

“I think you can learn a lot from both countries and benefit from an Irish and German education.”

Globe Business College, which is housed in an art deco building near the main train station in Munich, meets the needs of a specific niche group of German and international students – sons and daughters of parents who run successful family companies (Mittelstand).

Mittelstand companies provide the backbone of the German economy. “They are family run and generally have up to 500 employees, so they’re not like the SMEs here. Many are global market leaders and world famous brand names.”

There are over 3.3 million Mittelstand companies (99 per cent of private sector companies), accounting for the largest share of the country’s economic output. They employ about 60 per cent of all workers, provide crucial training, and contribute significantly to corporate tax revenues in the country.

“Students come from all over Germany and around the world, where the Mittelstand companies have factories, but we cap numbers at 120.”

For the students, Munich offers incredible perks. “It has a strong economic centre and well-known enterprises from the high-tech, electronics, communication and automobile industries such as BMW, Siemens, Infineon.

“This economic power generates excellent job opportunities for working students and graduates from all kinds of fields. Munich is also a city of ideas, innovation, and inventions. A part of the course, is to do parent company exchanges, where students get to work at parent companies like these, which is hugely popular.”

Luckily, Walsh says, coronavirus was handled well in Germany and classes for the bespoke college were back after eight weeks, “which is great as we offer pretty much one to one education”.

“Our system is pretty much the opposite of online learning – the means of much education since the virus hit in March.

“Children across the country are back to school now too,” she adds. “It’s been pretty smooth.

“You pay a lot into the health system here, but you get what you pay for. Obviously cases are still high, but not anywhere near as high as anywhere else. The Germans created testing kits very early on, with testing facilities across the country, contract tracing. And they have so many ICU beds they took in sick people from other countries.

“The governments and federal states and the many labs and researchers have done a great job. It’s comforting. You feel looked after.”

Munich is an incredible place to live, Walsh says. “The quality of life in Germany, especially Munich, is high. It’s safe, great for kids and families, and roads, infrastructure and health services are second to none. It’s bureaucratic, but not much more than anywhere else.

“I do miss home though. My parents and siblings are all there. We have a big family. I miss the Irish craic and friends,” Walsh says.

“I normally come back every six weeks with college, but haven’t been home since the pandemic started and quarantine restrictions were put in place between the two countries. I do hope it gets lifted soon and I can return home and get my students over.”

In the meantime, Walsh says she and her family will enjoy the warm German late summer plan for a cycling trip to Italy across the Alps.