Edward Bransfield: the Corkman who discovered the Antarctic 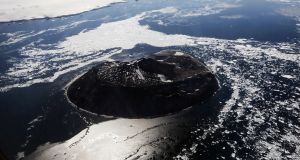 With a surface area 1½ times that of the United States, the Antarctic contains about 90 per cent of the world’s sheet ice . . . and not a lot else besides. It’s a wasteland so vast and desolate the only thing currently flourishing there are internet conspiracy theories. (Seriously, do a YouTube search for “Antarctica”. Or better yet, don’t bother.)

Readers may already have been aware of most of that. But what some might be surprised to learn is that the first confirmed sighting of the Antarctic continent was by a master mariner from Co Cork. Edward Bransfield was born in 1785 to a prominent Catholic seafaring family in the port town of Ballinacurra, near Middleton.

In 1803, when the Napoleonic Wars broke out, a British warship pulled into Youghal harbour and “impressed” – in other words, forcibly abducted – the 18-year-old Bransfield from the deck of his father’s boat into the service of the Royal Navy.

As a Catholic, Bransfield could not have received any formal education in Ireland under the Penal Laws at that time. But Michael Smith, the author of Great Endeavour: Ireland’s Antarctic Explorers, believes the boy must have been educated, probably at a hedge school, given the speed with which he rose through the naval ranks as an adult.

Bransfield survived for more than a decade fighting against the French, an impressive achievement given the mortality rates amongst sailors in that conflict. Remarkably, he rose to the status of an officer, eventually earning the rank of ship’s master.

When the war ended in 1815, most ordinary sailors were demobbed as unceremoniously as they had initially been impressed. But as an officer, a position was found for Bransfield in the navy’s new Pacific Squadron in Valparaiso, Chile.

It was there, in 1819, that a British merchant ship named the Williams sailed into port reporting that it had sighted uncharted lands south of Cape Horn.

The navy ordered Bransfield to investigate. He took command of the Williams and, with a crew of 30 men at his disposal, sailed 3,200km south from Valparaiso in December 1819. Even in what passes for summertime in that part of the southern hemisphere, he would still have had to contend with the constant threat of ice storms, fogs and icebergs.

On January 20th, 1820, Bransfield sighted “two high mountains, covered in snow”. He had discovered what is now called the Trinity Peninsula, the northernmost point of the Antarctic continent.

While Bellingshausen was never certain that what he had seen that day was land or just another iceberg, Bransfield meticulously charted and recorded the mountains and ridges he observed. On that basis, many now credit Bransfield as the person who discovered Antarctica.

Bransfield sent his charts and journals back to London in the hope that he would be commissioned to lead a second voyage back to verify his findings. But the admiralty wasn’t interested. Embittered, he quit the navy and spent the rest of his life working on merchant ships. He died in obscurity in England in 1852.

In 2000, Bransfield’s historic achievement was recognised when the Royal Mail issued a stamp in his honour. Since no likeness of the man survives, the stamp depicted an image of the RRS Bransfield, a British Antarctic surveying vessel. To date, the Cork man has received no such recognition in his native land.

Jim Wilson belongs to a committee of admirers determined to erect a sculpture in his memory in Ballinacurra in time for the bicentennial of his voyage in 2020. What will the sculpture depict, I ask, given that no portrait of the man exists?

“Oh, something abstract maybe,” he speculates. “Maybe two white mountains rising out of the sea...”

How can I help my nine-year-old son who has become depressed during lockdown?
Real news has value SUBSCRIBE