Dion Boucicault, the Irish playwright whose life was stranger than fiction 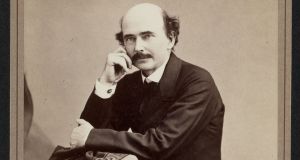 Playwright, actor and theatre manager Dionysius Lardner Boucicault is remembered as the originator of the so-called “sensation” scene, in which a hero or heroine is rescued from the brink of peril by some death-defying stunt. These spectacular scenes pushed the boundaries of the theatrical form in requiring ingenious sets, the use of wires, and many other processes which would eventually inform the swashbuckling films of Hollywood’s Golden Era.

The king of Victorian sensation theatre took inspiration for his plays from the many twists and turns in his own life. Born the illegitimate son of scientist Dionysius Lardner in Dublin in 1820, he blazed a somewhat chaotic trail across the theatre world in Ireland, the UK and America during a life that contained so many reversals of fortune as to render it dramatically implausible.

Firstly, there was his ever-shifting identity. His surname was originally Boursiquot, after his mother and the wealthy wine-trading family into which he was born. After early dalliances with engineering, and clerking for Guinness, he wrote his early success London Assurance in 1841, which appeared under “Dion Bourcicault”, the name he would use until 1845.

Although London Assurance was the first of many successes, the first of many bankruptcies would follow in 1842. Financial rescue came in the form of a wealthy French widow, the ill-fated Anne Guiot, who Boucicault married in 1845.

Anne was to die later that year in circumstances that call to mind one of Boucicault’s melodramatic scenes; she fell from an Alpine mountainside to her death. Suspicions around Boucicault’s involvement linger to this day, lending the depictions of villainy in his seemingly sweet-natured plays a darker air.

In 1848, Boucicault was bankrupted again due to ill-advised theatre management, and the febrile situation in Paris at the time. This experience, and the success of his 1852 play The Corsican Brothers, would lead to his lobbying for the introduction of a royalty system for playwrights based on a percentage of performance takings. He would win this right in 1860, in time for him to make huge earnings from his play The Colleen Bawn, but another bankruptcy would face him in 1863 after the failure of another theatre venture.

In the meantime, Boucicault had found time to abscond, in 1853, with the young actress Agnes Robertson, who accompanied him to the United States and bore him six children.

Boucicault stayed in American until 1859, premiering The Poor of New York in 1857 and his anti-slavery play The Octoroon in 1860. 1863 saw him implicated in the divorce proceedings between a Mr and Mrs Jordan - an exchange of letters in The Times details a series of farcical claims, counter-claims, late night brougham rides and midnight concealments:

“On the night in question she had begged me to lend her some books; so, after leaving her door, I drove round to my chambers in King-street, St James’, and returned immediately with the works. I had scarcely entered the hall when I heard a knock at the door. Presuming it was one of the lodgers in the house, and fearing my presence even in the hall might cause some remark, I withdrew to let them pass.” - Dion Boucicault to the editor of the The London Times, June 4th, 1863.

“He states ‘with some books;’ my wife’s statement was that ‘he brought her some figs.’” - Mr Jordan’s rejoinder.

Boucicault’s two greatest successes still lay ahead: Arrah na Pogue (1864) and The Shaughraun (1875). These plays were based around the United Irish rebellion and the Fenian Uprising, and both revolved around well-meaning gentry punished for their aid of Ireland’s bid for freedom, the machinations of villainous middle-men, and the wily cunning of the native Irish people.

Boucicault would often play these peasant characters himself, and in Conn the Shaughraun, created a loveable character who could easily fall into the stage Irish tradition - but who betrays a certain knowing sophistication. The Shaughraun was a huge success, touching such a cord that Benjamin Disraeli was moved to write letters calling for the release of the Fenian prisoners.

During the 1870s he moved between Britain, the US (where he now claimed citizenship) and Australia. In 1885, he left Agnes to marry the young Josephine Thorndyke. As Agnes and he were considered married under common law, the affair was treated as bigamy, and Agnes successfully sued for divorce. Boucicault sold the rights to a number of his plays to pay his legal fees.

Boucicault died in 1890 in New York, having given the world over 150 plays, the sensation scene, a new version of the stage Irishman, the matinee, the special effect known as ‘The Corsican Trap’ and fire-proof scenery. His melodramatic life proves the maxim that the truth is often stranger than fiction.

This Extraordinary Emigrants article was written by Jessica Traynor, deputy museum director at EPIC The Irish Emigration Museum (epicchq.com) in Dublin’s Docklands, an interactive museum that tells the story of how the Irish shaped and influenced the world.