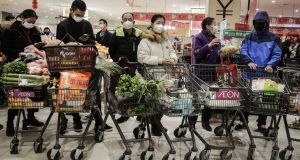 Wuhan resident wear masks as they buy vegetables in a market in the city which is at the centre of the coronavirus outbreak. Flights and public transport inhave been temporarily closed and officials have asked residents told to stay in the city to help control the outbreak. Photograph: Getty Images.

A Co Kildare man who is living in the Chinese city at the centre of the coronoavirus outbreak has described it as being “almost like a ghost town”.

Ben Kavanagh is working as a teacher in Wuhan, which has a population of some 11 million people and is the capital of central China’s Hubei province.

Mr Kavanagh told RTÉ Radio’s Morning Ireland that due to holidays around the Chinese New Year, he has been on a break from school since last Friday and has not left his apartment for “two to three days”.

Wuhan has effectively been cut off from the rest of the country in an attempt to contain the spread of the coronavirus. All 17 deaths linked to the virus have been in Hubei province and it has infected nearly 600 people in total.

Authorities banned all transport links from the sprawling city, suspending buses, the subway system, ferries and shutting the airport and train stations to outgoing passengers. Buses and ferries already on their way to Wuhan were advised to return to their starting points immediately.

Mr Kavanagh said he lives near a dual carriageway, which is usually very busy, but is now very quiet .

“You are allowed out, but there are so many rumours and people are worried, it’s better not to,” he said. “It’s almost like a ghost town.”

He said the latest suggestion was that the virus can spread through contact with the eyes and that people were wearing eye protection as well as masks.

“I have enough water for a few more days, but I will probably have to head out to the shops for food.”

Supermarket shelves in the city are reported as being bare and some residents have been seen hoarding supplies ahead of isolating themselves at home. Few pedestrians are on the street and many families have cancelled plans to get together for the holidays.

Mr Kavanagh had heard that prices for some products, such as celery, have already tripled because of shortages.

He said that when he does venture out he will wear a surgical mask over his mouth and nose and swimming goggles over his eyes.

The timing of the virus could not be worse, he said, with millions in China travelling to visit their families for the new year celebrations. While he is not very worried, he did admit that the issue “does play on the mind a bit”.

“I have no idea what to expect,” he said.

When asked if he would prefer to be at home in Co Kildare listening to general election debates or in a city attempting to combat a deadly virus, he said it was “50/50”.