NHS-style arrangements with developers for apartment blocks are under consideration 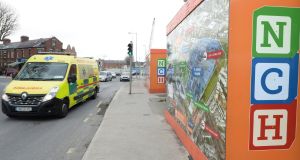 The National Children’s Hospital is due to open on the St James’s Hospital site in central Dublin in 2023, when it will employ 6,000 staff. File photograph: The Irish Times

The operator of the national children’s hospital (NCH) is looking at an NHS-style arrangement of acquiring blocks of apartments for the staff who will work there.

The NCH is due to open on the St James’s Hospital site in central Dublin in 2023, when it will employ 6,000 staff.

Children’s Hospital Group chief executive Éilis Hardiman said the cost of accommodation in Dublin was a factor for some staff leaving the existing group.

The group will operate the new hospital when it is completed.

Ms Hardiman said it was looking at possible apartment developments along the Luas and bus lines that connect with the new children’s hospital.

“One of our strategic planks from a HR perspective is how can we look at something collaborative around affordable accommodation when new staff come to Dublin. Is there a period we can get them \[provide accommodation for them] when they are settling in? That will be the biggest challenge,” she said.

“We are trying to see where are the developments that are off the Luas. We are looking at arrangements like they have in the NHS, where developers . . . help the NHS to house staff.”

She said sourcing accommodation was not the core business of the group, but she held out the possibility of staff at the new hospital having “first call on affordable housing”.

A development fund worth €500,000 was announced by the main contractor Bam Ireland on Wednesday.

The money will provide education bursaries and apprenticeship support in the Rialto area near the hospital which traditionally has had areas of high deprivation. Bam Ireland director Denis McCarthy said the fund had been in the company’s original bid to construct the hospital and was based on similar schemes operated elsewhere.

The company has already been involved in refurbishing a space for the Solas Youth Project and the F2 Homework Club where the launch of the fund took place.

Mr McCarthy said much of the difficult underground work in laying the foundations of the hospital had been done and the contractor is now proceeding with the construction of the interior rainbow garden in the centre of the hospital which will be as long as Croke Park.

He added he was precluded by non-disclosure agreements from discussing the costs of the hospital.

National Paediatric Hospital Development Board communications manager Rhonda Evans said the price as outlined at the recent Oireachtas committee hearing has not changed.

She said the figure of €1.433 billion with a further €300 million for the fit-out, is the same as it was when board chairman Fred Barry appeared at the Oireachtas health committee in November.

She stressed the price did not include inflation in the construction costs and there was a number of additional claims from the contractor Bam Ireland which was now the subject of independent arbitration.

“It [the final price] absolutely depends on the dispute resolution process,” she said.

Ms Evans said the hospital building is on target to be completed by 2022 which will be followed by an eight-month fit-out.

Ms Hardiman said Bam Ireland had been “open and honest about cost pressures beyond the contracted price” which it cannot control.

1 Cancellations and confusion as coronavirus threat edges closer
2 Coronavirus: What we know so far about how Ireland is affected
3 Mass gatherings due to go ahead in Ireland amid coronavirus outbreak
4 Conor Murphy told at Sinn Féin rally he has nothing to apologise for
5 Coronavirus and Europe: Hand shaking, hand washing and hand wringing in Brussels
Real news has value SUBSCRIBE