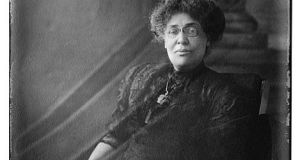 Margaret Murray Washington in 1915 in the Library of Congress.

Margaret Murray Washington had a precarious start in life. The daughter of an Irish immigrant sharecropper and an African-American mother, who worked as a washerwoman, her early life was beset by troubles including the death of her father when she was seven.

Her birth date is reported as either 1861 or 1865. Many of the details of her early life, including her father’s name, are lost. After her father’s death she was taken in by a Quaker brother and sister who strongly encouraged her education. She became something of a prodigy and was offered a teaching role at the age of 14. However, she was eager to continue her own education, and enrolled in Fisk Preparatory School, a college which would continue to welcome a majority of black students into the 20th century.

At Fisk, she met the educator, activist and orator Booker T Washington. He asked her to become “Lady Principal” of the Tuskegee Institute, which offered higher education for black communities in Alabama. At this point in his life Washington had been widowed twice, and a somewhat tentative relationship developed between him and Margaret between 1890 and 1893.

Margaret wrote to Washington about her feelings for him in 1890, but hesitated for some time in accepting his proposal the following year due to the hostility of his daughter, Portia, and her own dislike for Washington’s brother. The couple had a rather businesslike marriage, held together by their common aims and politics, and by her dedication to the upbringing of his three children from his two previous marriages.

Booker T Washington is most often remembered now for the “Atlanta Exposition Speech” of 1895, an unwritten agreement in response to the post-Reconstruction Jim Crow Laws. These were laws that were creating systemic inequality between black and white communities in America, and which continued to do so until 1965. Washington’s approach was one of compromise – anxious about estranging broadly sympathetic white people, he suggested that black people should submit to the rule of law, not agitate for the right to vote, and work to establish trust through acting as useful and productive citizens. In return, free basic education and access to vocational training would be provided. It’s undoubtedly that this approach allowed black communities greater access to education, but activists such as WEB Du Bois criticised Washington for his muted approach in the years that followed, and labelled the agreement “The Atlanta Compromise,” a moniker that has stuck.

Margaret was also a proponent of the politics of compromise espoused by her husband. Her 1898 speech “We Must Have Cleaner Social Morality” condemns the prejudice of white Southerners, but tempers its anger with a call for black people to pay more attention to matters of morality and parenthood:

“The condition of our race, brought about by slavery, the ignorance, poverty, intemperance, ought to make us women know that in half a century we cannot afford to lose sight of the large majority of the race who have not, as yet, thrown off the badge of the evils which I have just mentioned.”

It’s difficult to read this statement from a contemporary standpoint and not see a strange, victim-blaming attitude at work, and yet Margaret subscribed to the 19th century’s stern (and often paradoxical) views on morality. She goes on to discuss death rates as a great obstacle to creating population parity between black and white communities, saying, “Pneumonia and consumption are our most deadly foes”. It is difficult for a modern reader to understand how an increased moral fortitude on the part of black communities could help stamp out these diseases of the impoverished and the oppressed.

However, despite her conservative approach, Margaret contributed a huge amount to the lot of women of colour, through activities such as the co-founding of the National Association of Coloured Women (NACW) in 1895, by founding schools, and by campaigning for improvements in prison conditions. She also accompanied Washington on his speaking tours, addressing the wives while he gave speeches for their husbands. After Washington passed away in 1915, she continued her activism, and in particular contributed to anti-lynching activism. It is astonishing to consider now that at the 1920 National Association of Coloured Women Conference the main drive was to support in a bill that redefined lynching as an act of murder. Anti-lynching legislation would not pass both houses until the Dyer Bill in the 1930s. During the 1920 conference, Washington hosted and helped gain the support of the Southern Methodist Women’s Committee. One of her last achievements was to found the International Council of Women of Darker Races in 1921, an initiative to globally combat racism.

Margaret Murray Washington died in 1925. Despite her conservatism, her achievements are remembered in Tuskegee, where a building on campus still bears her name. She was inducted into the Alabama Women’s Hall of Fame in 1972 for “her compassion, intelligence and independence of judgment”.

This Extraordinary Emigrants article was written by Jessica Traynor, deputy museum director of EPIC The Irish Emigration Museum (epicchq.com) in Dublin’s Docklands, an interactive museum that tells the story of how the Irish shaped and influenced the world.

We want to build a separate granny flat. Where do we start?
3

‘It affects your nervous system, your brain, your thought process’
Real news has value SUBSCRIBE