The top stories of the week on Irish Times Abroad 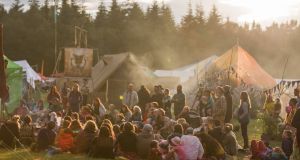 The Buddhafield festival in Devon has a group of Irish emigrants at the helm.

This weekend in Devon, 3,500 happy campers are gathering for Buddhafield, an alcohol and intoxicant-free festival. Darragh Murphy meets the crew of Irish emigrants at the helm to find out how they got involved, and whether they think the concept could work in Ireland?

“Genealogy is about personal identity, not ethnicity... It’s based on the simple but powerful premise that each and every person has a story worth knowing,” writes Fiona Fitzsimons of the Irish Family History Centre, in response to an article last week which questioned why we need to trace the ancestry of famous visitors like Meghan Markle.

Have you experience of buying a home outside Ireland? What was the bidding/offer process like? Are there such things as “bidding wars”, sealed envelope bids, etc? Is there more or less transparency than the Irish system? We want to hear from you.

What’s it like to work as an air hostess for an international airline? It has its ups and downs, says Lauren Reilly in this week’s Working Abroad Q&A, but she loves it. “I have seen places I had only dreamed of, and I feel so lucky. What job in Ireland would send you to the Maldives for 30 hours?”

Did you know that during baseball’s “Emerald Era” in the late 19th century, more than 40 per cent of NBL players boasted Irish heritage? Many became celebrities known all over America, including Mike “King” Kelly, who inspired the very first pop record. His remarkable story is written by Nathan Mannion of Epic, the Irish Emigration Museum .

Also in Abroad this week, Ruairi Glasheen shares his experience of taking his bodhran to Iran to make a documentary about drumming, Kathleen Curran tells us why she’s collecting the precious memories of 1950s emigrants to Britain, and we caught up with Minister for Diaspora Affairs to find out what he’s been up to since taking office a year ago, and what he’s learned: “The Irish diaspora is not a resource. It’s a community,” he says.