‘The Irish diaspora is not a resource. It’s a community’ 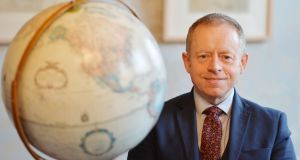 Ciarán Cannon, Minister of State for Diaspora: ‘As it moves from generation to generation that sense of Irishness begins to become diluted. If we allow that to happen, then we have a problem.’ Photograph: Alan Betson / The Irish Times

Before Ciarán Cannon was appointed Minister of State for Diaspora 13 months ago, he admits he was only “vaguely aware” of the Government’s policy on diaspora engagement. He didn’t know the Department of Foreign Affairs had a dedicated Irish Abroad Unit, or a budget to fund Irish organisations around the world.

In 2017, the unit provided €12.5 million in financial assistance to 396 projects from 260 Irish groups in 23 countries, through its long-standing Emigrant Support Programme (ESP), and a new “diaspora affairs” budget. It’s a significant sum of money, and Cannon wants not only every other member of Government to be aware it is being spent to support the diaspora, but everyone with an Irish connection, too.

On the desk in his office at Iveagh House overlooking St Stephen’s Green this week lies the first annual report on Support for the Irish Abroad, detailing the work of the unit and every organisation funded by it in 2017, from the Kilburn Irish Pensioners group in London, to the new Pieta House branch in New York, the Irish Business Club in Moscow, and the Grúpa Forbartha na Gaeilge in Hamburg.

As his portfolio as junior minister also encompasses international development, Cannon hasn’t had much time to rest idle. So far this year, he has travelled to 13 different countries or states, a whistlestop insight into just how diverse the Irish diaspora is in 2018.

“You have people from a poor bachelor who emigrated as a navvy or labourer back in the 1960s, right up to the girl who’s gone off to San Jose with her computer science degree and everything in between. Our engagement with them needs to reflect that diversity,” he says.

Almost two-thirds of the Irish Abroad Unit’s funding goes to welfare projects to support elderly and vulnerable emigrants, with the remainder spent on culture, sport, heritage, capital and business projects. Many of these organisations have been funded year after year since the ESP was first established in 2004, but Cannon believes a concerted effort now has to be made to reach groups and individuals who identify as having an Irish connection, but aren’t involved directly with Irish organisations.

“There’s a whole other cohort of diaspora that we’ve yet to somehow connect with, to give them a chance to reaffirm over and over again their Irishness within their own family, their own community, and deepen their affinity with Ireland over time,” he says.

A recent survey carried out by IrishCentral and Amárach, part-funded through the ESP, found that just 67 per cent of respondents did not engage with any Irish organisation, even though they identified as “Irish-Americans”.

The historical connection between Ireland and America is in danger of being eroded. The tightening of immigration laws in the United States, which has resulted in greatly reduced levels of Irish migration since 9/11, is a particular concern, but Cannon believes its potential impact on the Irish-American diaspora can be combatted by looking to the next generation.

In February, he travelled to Philadelphia to open the first international branch of Foróige, in an effort to engage young people with an Irish connection “in a contemporary way”.

“As it moves from generation to generation that sense of Irishness begins to become diluted. If we allow that to happen, then we have a problem,” Cannon says.

“Foróige encourages the children of Irish American people to become civic leaders in their own community through an Irish mechanism . . . and that’s powerful.”

Such grassroots Irish organisations are vital in maintaining the strong connection between Ireland and America, and the future of Irish-American relations, he believes.

“I was in Chicago about six months ago sitting at a table with some men and women who had come in for a barbecue on a Wednesday night. One guy in a tracksuit had been out training the under-15 GAA team, and next minute you find out he’s a court judge. Another guy is a partner in Ernst and Young in Chicago. This lady sitting over here is the president of one of the biggest schools in Chicago. They are Irish-Americans. But they are in their 50s and 60s. How do we ensure their children and their grandchildren feel that same affinity?”

The key to that challenge lies in Irish culture, Cannon believes, and although folk music and the GAA have vital roles to play, the focus must also shift towards more contemporary expressions of Irishness. The London Irish Centre in Camden is becoming a “cultural beacon for modern Irish culture”, particularly evident in its ability to attract Ed Sheeran – whose grandmother is from Co Galway – to play at a fundraiser for the centre last month.

“It is remarkable, a global star still feeling that deep inner connection to Ireland,” Cannon says.

During the recession, the Government looked to the diaspora as something of an economic saviour, with initiatives such as the Global Irish Economic Forum and the Gathering conjured up to strengthen business and tourism ties with the Irish abroad for financial gain. But Cannon is looking to redirect the focus, and believes even the language we use about the diaspora needs to change.

“I have never regarded them as a resource, because a resource is something to be drawn from constantly. It’s not about that; it’s about community,” he says.

“I prefer the phrase global Irish nation. You do not need to reside on the island of Ireland to consider yourself to be legitimately Irish, and have a role to play in terms of how we as a nation develop in the future. As a nation, I am referring to all of our people all over the world.”

At the very heart of efforts to “engage the Irish diaspora” is Cannon’s belief in the need to extend the franchise to Irish citizens living abroad. Ireland’s position as one of the only countries in the developed world with no emigrant vote was brought to international attention for the second time in three years in May when thousands of Irish citizens flocked home to vote in the referendum on the Eighth Amendment.

The issue will be only partially addressed by a planned referendum next year on extending the right to vote for president to Irish citizens overseas. Cannon, who is in favour of a vote for emigrants in general elections too, says it is an important first step.

“If we were genuinely serious about Ireland’s global interests in the future, having millions of people all over the world who feel they have a genuine role to play in the shaping of the future of this country [through their vote], they will be a massive asset to us.

“We’ll be campaigning hard . . . if it doesn’t pass, it will be very serious,” he says. “The symbolism of that to our people worldwide would be very damaging.”