A real turf fire, the stuff of dreams for any Irish person far from home

I won the sods in a raffle, much to the bemusement of my foreign-born daughters 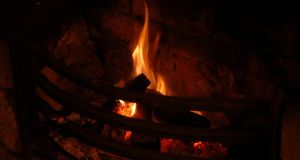 ‘Fuzzy memories of summer holidays spent in Connemara come back to me when I think of the lingering whiff from smoky fires of locally hand-cut sods.’

The turf arrived at our door one Saturday afternoon last January. By turf, I mean the rough-cut sods of peat that burn pungently and cosily in an Irish hearth - the stuff of dreams for any Irish person far from home.

We live in semi-suburban Dublin, not in a housing estate but in a little workman’s cottage that’s old enough and indeed, crying out for, a good turf fire of an evening. We had moved to Ireland the previous summer and after living in Italy and Norway, my kids and husband were still getting used to the way of things here. They still are.

The turf had been won in the raffle at the school Christmas fair. We were late getting to the prizes table and I passed over the other option available - a couple of bottles of expensive-looking wine - for this crumbly black stuff. We have enough Italian wine at home, I insisted to my surprised husband. Clearly I had notions about indoctrinating my family of foreigners to a very real, pungent Irish experience.

I grew up in Dublin but I’m secretly a bit of a culchie. Some of us are. Fuzzy memories of summer holidays spent in Connemara come back to me when I think of the lingering whiff from smoky fires of locally hand-cut sods. It’s also part of the family: my grandfather and his son-in-law, my uncle, were both involved in the early days of Bórd na Móna (which is nowadays going through serious cuts and identity changes in the face of the climate-change crisis).

It’s the smell of turf that does it. Mention a turf fire to an Irish person anywhere in the world and their eyes will drift off. Combine that with a hot whiskey, an uncomfortable seat, a good chat and maybe a slow tune played on a fiddle (well maybe that’s more for the tourists), and that’s the closest you’ll get to Irish hygge.

One Saturday afternoon, five bags of the loose, crumbly black stuff arrive at the door from the school dad, and I let the foreigners in the family deal with the exchange. I keep myself in the kitchen working on the dishes, where the mother of the cottage should be.

Then I realise we haven’t told the kids.

“Who’s at the door?” asks the younger daughter.

“It’s the people delivering our turf.”

“It’s for a fire? I thought we weren’t going to use the fireplace,” says the elder child nervously.

“Well your mother won it in the school raffle, it’s here now.”

My polite Canadian husband greets the man with his delivery.

“This is great, thanks a lot,” he says. “So how do you actually light it? How do you use it? Does it smell a lot?”

This stuff is very rough-cut, not the kind you easily find in the... shops, or wherever you buy fuel in Dublin. We don’t actually find out where the man got it from; his peat bog in the back garden? My husband hauls it bag by bag through the narrow hallway out to the back yard, and finds space for it in the plastic fuel shed our landlady used for coal.

And that’s where it stayed. Later that night, I went out alone to have a look and a whiff. It’s ragged stuff alright, very natural, organic even, and guaranteed to stink out the neighbours. Oh but it’ll be worth it, I think.

The slight air of contraband that hung over the doorstep transaction meant we wanted to check that we could definitely burn it. We have never used a fire much, not even in Norway where plenty of other city centre apartments like ours had stoves and fireplaces.

A local chimney sweep called Tim comes over; he’s surprisingly young and has no cockney accent. He checks over the fireplace - which is actually a stove - and knocks out a load of dirt. He says we can burn the turf, no problem.

In the end, we’ve only used the turf a couple of times in the past year, thanks to various excuses: the cottage is too small and heats up too quickly, the kids are late sleepers and get nervous of it.

But the times we have lit it, it’s a treat. It burns up nicely, and not too much heat comes of it. We have to open the stove door to capture some of the smell, sometimes standing outside to get the fuller effect.

“Smell that? That’s our turf.”

Emma Prunty is writing a series on her experiences of settling back into Dublin after many years abroad and seeing it with fresh eyes, along with her family of foreigners. After living in the UK, US, Canada, Norway and Italy she knows there are pros and cons to every place you move to. She blogs at washyourlanguage.com

Hugh Wallace: The day I stopped drinking changed my life
4