Hot summer in Australia, where fruit is cooking on the trees 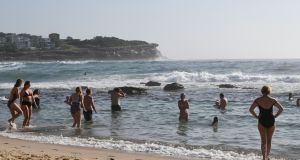 Beachgoers cool off at Bronte Beach in Sydney as heatwave conditions swept across the state last week. Photograph: Joel Carrett/EPA

We are greeted this January morning with the familiar smell of acrid smoke everywhere outside. We’ve become used to the thrumming sounds of waterbombing choppers flying overhead, as if our valley has been transformed into some kind of apocalyptic movie set.

By the middle of the day visibility is lousy and, with no wind forecast, things won’t improve any time soon. Our asthmatic daughter is reluctantly resigning herself to another day indoors with Netflix and, likely, old episodes of How I met your Mother.

Welcome to summer in Tasmania.

We’re only half-way through the season but this summer’s unforgiving heat is exacting a terrible toll on Australia’s landscape and its inhabitants. Some of our elderly folk are always prone to succumbing during heatwaves and blackouts. Air-conditioning is a luxury many simply cannot afford.

Successive heatwaves with temperatures soaring well into the mid-40s right across the country are now almost de rigueur. A German tourist has perished while cycling in central Australia. In South Australia, stone fruit are literally cooking in orchards due to the prolonged extreme temperatures.

Last week, in New South Wales, hundreds of thousands of fish, including 100-year-old Murry Cod, have perished in the shrunken, once mighty Darling River. To convey some sense of the area concerned, the Darling is more than four times the length of the Shannon. A depletion in the river’s oxygen levels is believed to have killed the fish.

Water theft on a grand scale, and lax regulations regarding unfettered irrigation to produce cotton, rice and other crops all along the river, as well as drought, are the main culprits behind what’s being described as one of Australia’s biggest environmental catastrophes. One property that cultivates cotton, inappropriately called the Cubby Station, holds a water licence enabling it to extract the equivalent of Sydney Harbour from the river every year.

Visiting drought-stricken New South Wales recently, our evangelical-leaning prime minister Scott Morrison asked everyone to pray for rain. But beyond that somewhat esoteric edict, the government stands accused by a growing number of people of being derelict in their duty to address climate change. A throwaway comment by our deputy prime minister Michael McCormack on Friday, that Australia has always endured droughts, hardly offers much reason for optimism.

Here in Tasmania, up to 70 bushfires are burning across the state. It’s unlikely any “fire-footage” will have been beamed across the globe, as was the case with the Dunalley fire in 2013 when more than 100 houses were lost. Most of the fires are burning in remote areas, well away - for now at least - from populated areas. But these fires are devastating the island’s unique, near pristine wilderness and fragile ecosystems.

Although up to 40 per cent of bushfires in Australia are deliberately lit, most of these Tasmanian fires appear to have been started by lightning strikes. A string of humid days has ushered in dry electrical storms, and farmers are fearful they may lose their crops. Farming in Australia is often a fraught affair.

Like mainland Australia, Tasmania cannot avoid the knock-on effects of climate change. While our temperatures are not as extreme as the mainland, a fire in the south-west wilderness area, 100km west of Hobart near Gell River, has been burning since late December. So far, 200sqkm of buttongrass, peat and scrub vegetation have been decimated. In this difficult, inaccessible terrain, experts predict the peat could continue to burn for months.

This densely-forested island at the bottom of the Australian mainland, previously cool, damp and temperate, is now burning and prone to further catastrophic bushfires, as a consequence of climate change.

Like the rest of Australia, we are enduring hotter, drier years with no indication that these weather patterns are likely to ease.

Living in the bush, we have our bushfire plan ready. We will stay and defend our property if that’s a realistic option. But if the advice is to flee, we won’t hesitate. Everyone here knows that catastrophic bushfires take no prisoners. Hopefully it won’t come to that.

Just as well our daughter is coping with being cooped up indoors; for now, at least.