Tech a look at these . . . These cool devices will delight the techies in your life 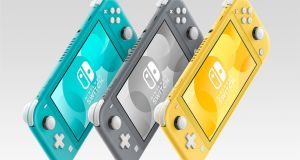 Mini versions of retro game consoles have become all the rage in recent years, as seen with the Nintendo Classic Mini or 2018’s PlayStation Classic. Sega is looking to get in on the action with the Sega Genesis Mini, which might be the best yet. It’s loaded with 40 nostalgic classics including Sonic The Hedgehog 1 & 2, Castlevania: The New Generation and Street Fighter II, so for parents who want to get their children into retro gaming, Genesis is the best way to start. €74.99, gamestop.ie

The mere idea of wireless earphones seemed magical just a few years ago, but now they’re relatively commonplace. The original AirPods remain one of the most popular brands available, but the second-generation version is even better. It boasts improved audio quality, a decent battery life and handy charging case. €179.99, harveynorman.ie

The ever-increasing quality of camera phones means taking pictures is a literal snap, but there’s still something unbeatable about taking a Polaroid photo too. The Polaroid OneStep 2 is an analogue instant camera with a massive, 60-day battery life, standard and portrait lens and a chunky retro design. Be warned, this is an analogue-only camera, and doesn’t take digital photos. €129.99, camera.ie

Virtual reality always feels like it’s threatening to break out, but the expense of the tech and the issue of motion sickness seems to hold it back. It’s taking a foothold, however, and the Oculus Go is a great way to get started with VR. This standalone headset is lightweight, comes equipped with surround sound and a high-quality lens. The fabric used for the headset also means you won’t be reduced to a sweaty mess within five minutes of play, which is a bonus. €259.99, currys.ie

While we’re (hopefully) a good way out from a Terminator-style AI uprising, smart speakers are becoming more popular by the year. The Amazon Echo Dot is a useful – and more importantly, affordable – little speaker with fantastic sound for streaming music or podcasts, it can make or receive calls and Alexa is always there to obey your commands. £49.99, amazon.co.uk

The Nintendo Switch has proven to an immensely popular piece of kit, bridging the gap between TV games console and handheld perfectly. For those solely interested in the handheld side of things, the Nintendo Switch Lite is the solution. It’s got a decent battery life, a 5.5in touch screen and is compatible with Switch games that support the handheld mode. That said, unlike its big brother, it can’t be docked to a TV and the controllers can’t be removed. €229.99, currys.ie

The days of hauling a heavy boombox are long gone, with portable Bluetooth speakers proving much easier to cart around. The Anker SoundCore 2 is one of the best on the market, coming with a 24-hour battery life, good-quality sound and a waterproof design, all for a very reasonable price. £39.99, amazon.co.uk

Coffee and tea is the nectar that keeps the world turning, but there’s nothing worse than leaving it alone for 10 minutes and coming back to a cold cup. This shouldn’t be a problem in the 21st century and with the Cosori Coffee Mug Warmer, it won’t ever be again. This portable cup heater will keep coffee, soup etc nice and warm so you can enjoy at your own pace. It’s also spill-proof and can be used with glass, ceramic or iron mugs. £37.99, amazon.co.uk

Watching movies on a laptop or iPad can never quite replicate the cinema experience, but the Anker Nebula Capsule can help with that. This portable mini projector comes with a long battery life, great image quality and 360-degree speakers. Of course, it doesn’t have to be limited to movies and it can project everything from YouTube videos to photos too. €429.99, argos.ie

The Ecovacs Deebot N79S is a robot vacuum that can help take some of edge off tedious housework. From carpets to hard surfaces, just set one of four cleaning modes and let it rip. The Deebot is systematic in its approach to cleaning and its anti-collusion tech means it won’t end up banging its head against the wall or falling down the stairs. £209.99, amazon.co.uk

‘Tonsillitis should always be treated as serious’
9