A Cork gallery has removed the fig leaves from its statues, showing that small is beautiful 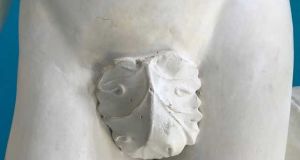 In the brilliantly titled Fig Reveal, Cork’s Crawford Gallery recently supervised the removal of fig leaves from its Canova casts. The statues – of Apollo, Adonis and company – came from the Prince Regent (later George IV). He had been given them by the pope in the early 1800s, in thanks for helping deal with Napoleon at the Battle of Waterloo.

Antonio Canova himself supervised the casting, from originals in the Vatican collection, but the great artist is not suspected of adding the foliage. It’s thought the leaves were stuck on in Cork to, as curator Michael Waldron puts it, “spare the blushes of the locals”. Mark Twain quipped that “the statue that advertises its modesty with a fig leaf really brings its modesty under suspicion”, and there is something about a fig leaf that symbolises the kind of prurience, whereby a stream of prohibitions masks an obsession with sex.

Fig leaves directly reference the leaves Adam and Eve were said to have stitched together, after munching on apples led to their discovery of shame. When I called into the Crawford to take a look at the de-figging, the brilliant classics professor and broadcaster Mary Beard was there, filming for her forthcoming BBC Two documentary, The Nude Uncovered, airing later this year. Beard is exploring why, as a clothed society, we have made, and continue to make, so many images of naked bodies.

She asked me what I thought of the recently revealed genitalia. As with many things, my imaginary version had been bigger. In fact, scholars have put time and effort into exploring the question of penis size in sculpture. Michelangelo’s David’s is, for instance, surprisingly small. One reason is that in ancient Greece, which is the inspiration and source for a great deal of Renaissance art, a large penis wasn’t something to shout about. Instead, a smaller size was associated with good citizenry and intellectual pursuits. Scholars have also posited that Michelangelo, ever keen on exactitude, created his David diminished due to the natural fear of facing off against Goliath.

Nevertheless, when a cast of the David was given to Queen Victoria by the Grand Duke of Tuscany, a special fig leaf was made to hang on the statue’s groin, and kept handy in case she popped by. But I had wrongly assumed that all fig-leafing was a Victorian pastime. When the David was first installed outdoors in Florence, in 1504, a modesty garland of metal leaves hung from the waist.

In 1563, the year before Michelangelo died, the Council of Trent banned “lasciviousness” in religious imagery, and a dedicated campaign of figging began. Mostly this was just a question of covering up, but, in the 1800s, Pope Pius IX went further, and had the genitalia hacked off completely. I remember a historian saying, some years ago, that the Vatican, great collectors that they are, have crates of severed penises somewhere in their vaults.

The ancient Greeks saw the well-honed nude body as something honourable and virtuous, rather than a site of immorality and vice. Shame hides a multitude of sins. Or, more properly, shame allows a multitude of sins to be repressed and hidden from the light of scrutiny. It also twists natural desires into something more uncomfortable, and sometimes the greatest perpetrators are also those who can’t bear to be seen publicly to look. Art can be a great revealer. In 2003, officials covered up a tapestry of Picasso’s famous anti-war painting, Guernica, ahead of US secretary of state Colin Powell’s presentation at the UN in New York arguing for war against Iraq.

I was reminded of this when listening to the RTÉ documentary on the treatment of Majella Moynihan, the former garda hounded by her superiors (if ever a word was more misapplied) for becoming pregnant “out of wedlock” in the 1980s. It was the obsessive intensity of the questioning that got me, the way they couldn’t let it go.

It’s time to take a leaf from the Crawford’s book, and relearn to consider the body in all its beauty

Sculpture conservator Eoghan Daltun has done both the de-figging and the “sensitive restoration”, most notably with Adonis, who had been almost completely unmanned. Incidentally, a 1971 Irish halfpenny piece was found underneath Apollo Belvedere’s fig. Waldron suggests a student put it there when the gallery was still an art school. More fancifully, you might imagine the resourceful statue’s lack of pockets for a night on the tear. Ludicrous musings aside, it’s time to take a leaf from the Crawford’s book, and relearn to consider the body in all its beauty. Without shame.