Why Covid dissidents need to be understood, not demonised 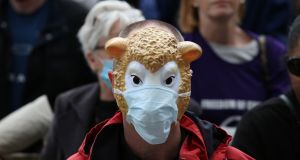 Coronavirus conspiracy theories may have started out as a joke, but they now threaten to derail the global fight against the pandemic. Vaccine hesitancy is identified by the World Health Organisation as one of the top 10 threats to public health, and resistance to the new Covid-19 jabs risks undermining the efficacy of Europe’s vaccination rollout plan.

UK scientific advisers last month voiced concern at data showing 72 per cent of black people saying they were unlikely to have the jab. Historical issues of unethical healthcare research and institutional racism were cited as key reasons for lower levels of trust, an expert report found. Other research shows conspiracy theories tend to flourish in communities that have traditionally felt the brunt of economic hardship and political neglect.

For this reason, argues Dr Katherine Furman, we need to understand Covid policy dissidents and vaccine refuseniks rather than demonise them. Furman, a philosopher and public policy researcher based at the University of Liverpool, is one of the speakers at a conference in Dublin next week on how a democracy should deal with conscientious objectors. In advance, she sets out her stall for the Irish Times Unthinkable philosophy column.

How does one distinguish between a conscientious objector and a mere law-breaker?

Katherine Furman: “Conscientious objection is about non-compliance with the law on value-based grounds. A conscientious objector says, through their action: ‘This is a red line for me. I won’t do this.’ There are lots of ways you can be a law-breaker and most of these will have nothing to do with your deep-held moral commitments.”

To what extent can a liberal democracy allow for conscientious objectors to public health measures?

“It is easy to be a liberal democracy in homogenous societies with lots of agreement about values. It is more challenging when there is deep value pluralism. Things get harder still when there are groups who don’t have much – or any – access to democratic processes. This isn’t just about voting, but also about the conversations that determine policy.

“Once we recognise that value pluralism is normal in liberal democracies and that some people don’t have good access to democratic processes, I think this changes the way that we view some cases of conscientious objection and civil disobedience. Sometimes it is an effort to be heard, especially when people’s lives and livelihoods are on the line.

“At one point during lockdown here in Liverpool there were weekly ‘anti-mask protests’ down the main street in the city centre. These were notionally anti-mask, but the chants and placards were also anti-lockdown and anti-vaccine. These protesters were breaking the law because of lockdown measures and some were arrested. However, I think we need to view these events in context.

“Liverpool is a city that has historically been betrayed by conservative government and there is continued suspicion of the state. Lockdown has come with severe economic hardship here. For instance, foodbanks have reported a dramatic increase in their use. This is something social scientists will need to study to properly understand what was going on here, but I think it would be too quick dismiss protesters here as merely being ‘law-breakers’.”

What is an appropriate punishment for people who – in the form of political protest – break Covid rules on mask-wearing or breach lockdown restrictions?

“I am less interested in punishment than I am in trying to understand what is being communicated by these acts of protest.

“Heidi Larson, a medical anthropologist who runs the Vaccine Confidence Project at the London School of Hygiene and Tropical Medicine, has argued that we need to pay close attention to rumours in vaccine-hesitant communities because they can help us understand what is motivating them. And that the motivation is often based in mistrust of institutional structures and loss of dignity within these systems. This seems to be even more the case for acts of protest.

“Spreading a rumour is a fairly low-cost activity, where engaging in protest is substantially more effort. You need to co-ordinate with other people, you need to get out of bed on Saturday morning to attend the march, you need to risk being arrested.

“Paying attention to what communities are communicating via protest isn’t important because it is a nice thing to do. It is important for health interventions to succeed. Health interventions require public participation. There is no point in developing a vaccine programme if nobody shows up to be vaccinated. Similarly, there is always going to be a limit to the state’s ability to police lockdown and mask measures.”

The conscientious objectors we tend to respect from history are those devoid of self-pity – those, like the pacifist philosopher Bertrand Russell, who preferred to go to prison rather than cross a moral red line. Is punishment something conscientious objectors should stoically accept as the price for living in a state that decides its laws democratically?

“Part of what I like about this question is that it makes clear the diverse social positions that conscience objectors can occupy. Some will have plenty of access to democratic processes, so perhaps they are required to accept punishment when they contravene the laws that are developed via those processes. However, our actual democracies are imperfect, and not everyone has opportunities to contribute. Some are marginalised, and their views and values are dismissed.

“If protest is the only route available to you to make your views known, suggesting that you should then stoically accept your punishment from a system that has failed you is inappropriate.”

The conference How should a liberal democracy react to conscientious objection claims? is being hosted online by the Royal Irish Academy on Thursday, February 11th. It will feature a series of discussions on conscientious objection from legal, philosophical, theological and religious perspectives. Speakers and moderators include philosopher Prof Kimberley Brownlee, former president Dr Mary McAleese, Senator Michael McDowell and Mr Justice Gerard Hogan, advocate general at the Court of Justice of the EU. It is a free event but booking is required. See ria.ie