Unthinkable: What are the limits of civil disobedience?

From boycotting water charges to ‘informing’ on your boss, what duties do you have when you protest? 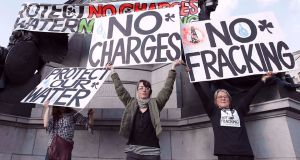 Probably the first case of whistleblowing on record is in The Emperor’s New Clothes. You know it’s a fairy story because the child who unmasks the fraud of the royal tailors, and brings embarrassment to the kingdom, comes out on top.

In real life, as Edward Snowden can testify, those exposing an in-group’s dirty little secrets tend not to experience a happy-ever-after.

The rights of whistleblowers are to be explored at a conference in Dublin this week, along with the related topic of civil disobedience. The Conscience Project, organised by the UCD department of philosophy, is a response not only to the financial crisis but also to recent scandals in law-enforcement agencies in Ireland and overseas.

So when is it okay to disobey orders or to defy the state?

Kimberley Brownlee, associate professor in legal and moral philosophy at the Warwick University Law School, says civil disobedience plays an important role in democracies “by focusing our attention on neglected issues”. But she stresses that motivations matter: acting out of self-interest diminishes the value of public protest.

By defining the limits of legitimate disloyalty, she provides today’s idea: “Civil disobedience is a constrained, conscientious breach of law that communicates our opposition to a policy.”

When is civil disobedience justified?

Brownlee: “We’re justified in resorting to civil disobedience when our cause is valid, we’re motivated by that cause to disobey, we’ve made reasonable efforts to use legal channels first, and we’re sensitive to the likely impact on other people. Civil disobedience is not just justified, but praiseworthy, when it helps to remedy grave injustices in our society.”

Under what circumstances would it be right for someone to refuse to pay a tax they think is being unjustly levied?

“A tax used by the government to prosecute a genocide or patently unjust war would serve a manifestly unjust end and people would be right not to pay it. Of course, the problem there is our taxes don’t usually go into specific pots, which makes it harder to judge whether, and how much tax, it could be right to withhold."

"Doing the right thing is important, but motivations matter too. If we refuse to pay an unjust tax purely to line our own pockets, then we’re insensitive to the real reasons that should motivate us. If we tell ourselves we’re motivated by the injustice, but we keep our disobedience secret, then we don’t contribute to a public debate about the policy."

“Society puts too much pressure on us when it requires us always to put the law ahead of our deepest moral commitments. Where possible, society should tolerate our efforts to honour our deepest commitments, provided this doesn’t intrude upon others’ rights to do the same. So, if we believe deeply that a tax is unjust, or that tax in general is unjust, and we don’t try to evade the costs of refusing to pay it, then we deserve to have society’s toleration where possible.”

But is it fair for someone to seek a special dispensation, or to ‘opt out’ of some public policy?

“If we engage in personal disobedience to ‘opt out’ from a policy like paying our taxes because we think tax is wrong, then we must accept that with our act comes the loss of the goods that go with reciprocity. Also, before we opt out, we must do all we can to make sure our decision is morally defensible and will not do unfair harm to others.

“If we engage in civil disobedience, we don’t ‘opt out’ of a public policy. Instead, we use constrained breach of law to try to get people to deliberate about our cause. There is a common complaint that, in doing this, we give ourselves special licence to disregard democratically enacted laws that others have bound themselves to follow. But, this complaint is misplaced, since civil disobedience can contribute meaningfully to democracy.”

What are the rights and responsibilities of whistleblowers?

“Many whistleblowers are courageous exposers of moral wrongdoing, but some are not, for example, the anonymous informant who exposed Anne Frank. The first responsibility of a whistleblower, then, is to determine as well as possible that there is a serious wrong that needs to be exposed and that the costs of exposing it are worth bearing.”

In some cultures, ‘ratting’ or ‘informing’ is seen as a low act. Does whistleblowing strengthen or weaken social cohesion?

“Whistleblowing might seem to weaken social cohesion by creating risks for the targeted parties, their colleagues, and families as well as for the whistleblower herself and her associates. The history of the whistleblower is littered with firings, indictments, death threats, and imprisonments of the unlucky non-conformist.

“Whistleblowing also might seem to involve both disloyalty and arrogance. The whistleblower seems to give herself a role that is not appropriately hers to police others’ behaviour.

“Finally, whistleblowing might seem to be divisive since it is designed to attract attention, which can encourage copycats and produce general disrespect for the persons or institutions involved.

“But, unless the whistleblower is mistaken, she does not create these risks. The targeted parties who act wrongly create them.

“The US intelligence community is responsible not only for the intrusive surveillance schemes that Edward Snowden exposed, but also for the risks to social cohesion that come from making that exposure necessary. When the whistleblower exposes serious wrongdoing that cannot be remedied otherwise, he performs an important service to the community.”

*  The Conscience Project, organised by UCD Department of Philosophy as part of the President of Ireland's Ethics Initiative, is hosting a workshop this week and a further workshop followed by a public meeting at the Royal Irish Academy on November 24th. For further details see: http://www.ucd.ie/philosophy/newsevents/conscienceproject/