A Ciambra: The trials of a chain-smoking scrappy street-kid

Review: Pio Amato is charismatic as a Romany boy pushed into petty crime in Calabria 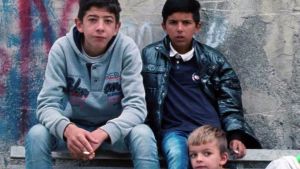 Jonas Carpignano made a splash at Cannes with his debut feature, Mediterranea, a neorealist study that introduced Burkinabe migrant Aviya (Koudous Seihon) and a scrappy street-kid named Pio (Pio Amato). Both characters return for this Martin Scorsese-produced semi-sequel, with Pio, a colourful minor character in Mediterranea, taking centre stage.

The chain-smoking Pio is the runt of a rambunctious Romany family – all appearing under their own names – living in a gypsy community in the Calabrian coastal town of Gioia Tauro. His grandfather romantically recalls their once-nomadic lifestyle: “Once we were always on the road. We were free. We answered to no one.”

But these days the clan are reduced to petty crimes. His older brother, Cosmino, steals cars for a local Italian kingpin. Even the household’s electricity is piggybacking of another supply. When father Rocco and Cosimo (Damiano Amato) are imprisoned, Pio becomes the household’s new breadwinner by default. He swipes luggage from trains and sells anything of value he finds, often using Aviya as a fence.

Pio’s friendship with Aviya is unusual in a community where the dinner table banter is characterised by eye-watering racism. Pio’s brother talks of the animals in Brazilian jails. His formidable but loving mother says the blacks are all drunk in a room where children are swigging beer.

Pio, however, is visibly at his brightest watching football and chilling in the local African refugee camp. Inevitably, his African friends do not go down well with his family.

The New York-born, Rome-raised Jonas Carpignano has spent years building trust with the downtrodden communities depicted in A Ciambra and it shows in every free-flowing take. With a nod to Roberto Rossellini’s classic neorealist trilogies, the writer-director allows his players to play themselves within a fictionalised narrative. In common with the young protagonist, Tim Curtin’s handheld camerawork and Dan Romer’s score are restless and energetic.

Pio Amato, who is in almost every frame, makes for a charismatic lead. He is likeable enough for the viewer to overlook his low-level lawlessness, without tipping over into ragamuffin.