Unthinkable: Who decides what it means to be a person?

Can either science or philosophy provide a satisfactory definition of personhood? 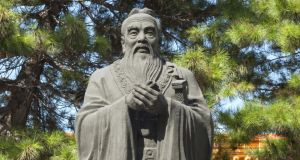 Confucius: China has a concept of humanity in the Confucian tradition that bears remarkable similarities to ours

The history of western civilisation has in part been a history of disputed personhood. At different times and in different contexts, certain categories of human – including slaves, Jews, and the targets of terrorism – have been treated as non-persons.

There are impassioned debates these days about abortion and end-of-life care in which conflicting definitions of personhood are advanced. A further challenge at this time is how to guarantee common protections for people across international borders.

This prompts today’s idea, as advanced by Prof Dermot Moran, professor of philosophy at UCD: A comprehensive account of what it means to be a person is urgently required.

“In our more inclusive society, we want to call all of these people ‘persons’, and therefore we can’t rely on the old definition of personhood, which was exclusively one based on rationality. The problem is that modern definitions of the person are not much better.”

Is this a question that should be answered by philosophers or scientists?
“I think the sciences cannot answer this question, although they can provide a huge amount of background information and clarification. The question is really either a metaphysical question or a philosophical question that has a moral implication.

“It’s a bit like membership of a club. The fact that we include or exclude certain people from the club is a matter of decision. It might be based upon physical characteristics, or some other characteristics that are identifiable by the sciences, but the concept of being a member of a club is not a scientific concept. There is no brain investigation that is going to find some little molecule where we can say: ah, that is where a person comes from.”

What solutions have philosophers provided?
“There are a number of different answers that are clashing with one another at the moment. There is a strong emphasis still on the concept of the person as autonomous, and this autonomy – an ability to make free decisions and choices – can be there even with relatively minimal rationality.

“There is another view that what makes human beings persons is the ability to have what the philosopher Harry Frankfurt called second-order desires and beliefs – in other words, to have beliefs about your beliefs – but, again, it wouldn’t apply to people in a coma, so it wouldn’t be all-inclusive.

“There is another view which is more dismissive, which thinks that a person is a kind of social category which we will eventually abandon. It’s a kind of convenient notion that’s used to label a huge cluster of functions.

“And then, to throw another thing into the mix, there is a strong argument that personhood should not be exclusive to human beings, that certain higher-order mammals could be persons also.”

Should we be concerned about this lack of consensus?
“There is a certain degree of urgency because our whole framework of human rights, and the international declarations and charters of human rights, are based on this notion of integrity of the person, and of the person possessing certain inalienable rights. But if we don’t know what persons are, we could very quickly get into problems.

“There are already problems in the East-versus-West debate. In China, for example, they have a concept of humanity in the Confucian tradition, and it bears remarkable similarities to ours, but there are differences, and they turn on the same kinds of things as to what takes primacy: rationality, autonomy, or is it participation in the wider group, belonging to a family, duties and obligations to the community, and so on?”

Are there particular capacities that are important in personhood?
“I think having a sense of future is very important, first of all for the basis of autonomy, but also for who we are. Even very small children have a sense of where they want to go, what they want to be, what tomorrow will be like, and so on.

“We are not sure if animals have that or if they live in the moment, literally, and are not capable of a certain kind of prediction.”

Is there a point where someone ceases to become a person?
“It has certainly been argued. Peter Singer, for example, argues that people with advanced states of dementia, or perhaps in irreversible comas, or who have various other neurological conditions where there is no possibility of consciousness, have really stopped being human beings. That would place some degree of conscious awareness at the very basis of personhood.

“I don’t think we have yet agreed on that. I think it would be premature to start invoking laws, for example, to justify involuntary euthanasia, because we don’t yet know what really constitutes ‘persons’. If we could figure that out we could frame our laws around it. But right now we are better off treating everyone as a person unless we know otherwise.”

Question: “It’s not yet February and I’ve blown all my New Year’s resolutions. What’s wrong with me?”

Iris Murdoch replies: “One of the secrets of a happy life is continuous small treats.”