Millions of people will watch ’Game of Thrones’ on Sky, but many more will stream or download it illegally

Whet your appetite for season six of hit television show Game of Thrones with the latest teaser trailer. Video: HBO 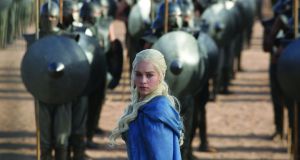 Emilia Clarke as Daenerys Targaryen in Game of Thrones.The success of the hit HBO series has propelled the North into the international spotlight as a filming location.

Barack Obama has already been granted a sneak preview of the new series of Game of Thrones, but the rest of us will have to wait until early on Monday. Over the last five years, the fantasy series, based on the books by George RR Martin and shot largely in Northern Ireland, has risen from guilty pleasure to cult favourite to become the television phenomenon of the decade.

In Ireland and the UK, the first episode of the sixth series will be broadcast at 2am to coincide exactly with the US time slot.

“Last year I stayed up for it. This Monday I’ll probably get up [and watch it] at 6am,” says unabashed fanatic Oisín Ó Cuilleanáin, a film student at Ballyfermot College of Further Education, who admits that his college work starts to suffer every year when the new season approaches.

Why does the show exert such a fascination? “It operates on so many different levels,” says Ó Cuilleanáin. “It’s like the best of House of Cards, The Sopranos and Lord of the Rings.”

The ungodly premiere time stems from a decision made last year by Sky to reduce the incentive for piracy by getting rid of the gap between transmission times in the UK and US. On one level, that policy has paid dividends: last season’s series finale was the Sky’s most- watched entertainment programme ever. Overall, last year’s ratings were up 42 per cent on the previous year, and Sky also saw record-breaking demand for its “box sets” of previous series.

But there’s another side to the Game of Thrones story. Ask any fan how they actually watch the show and there’s a very good chance the answer won’t involve Sky Atlantic.

“I use torrents to download episodes of Game of Thrones from the internet,” says Brian (not his real name), a software architect from Dublin. “Torrents essentially download small sections of the episode from lots of different sources and then put them back together so you can watch it. I also use a VPN (virtual private network) while doing this, which encrypts all of my internet usage and routes it through another country, meaning my service provider can’t tell what I’m doing.”

Conor (not his real name), a business student, also uses torrents, along with the streaming platform Popcorn Time, which offers thousands of pirated TV shows alongside movies such as The Revenant and Star Wars: The Force Awakens.

“People download all the time,” he says. ” I don’t think I’m breaking the law. I think I pay for it in the end because I do buy the box sets.”

Actually, Conor is wrong. He is breaking several copyright laws by downloading and storing an illegal copy of the show. But he certainly won’t be alone.

Game of Thrones was the most-pirated show of 2015, with almost 14.5 million people globally using the BitTorrent service alone to watch it. That number doesn’t take account of other torrent services or of views through illegal streaming sites. The numbers were probably boosted by the leak of the first four episodes online in advance of their official transmission, but they clearly show the appetite for pirated versions among the general public.

“The quality is consistently comparable to TV or higher,” says Brian. “And downloading an episode would usually take less than five minutes. It’s a quick, easy and reliable way to get the episode, and it can usually be done within 12 hours of the episode being released on TV.

"The only disadvantage is that this is inherently wrong and illegal, and if all things were equal, I’d really like to pay for it.”

The high level of piracy must be galling for Sky, given its efforts to make Game of Thrones easier to view legally; the Sky Now service, for example, offers anywhere, anytime viewing options for customers.

In response to a query from The Irish Times, a Sky Ireland spokesperson said the company “would welcome a greater focus on criminal enforcement, and the ability of victims of digital theft to be able to seek redress from criminals who operate on a cross-border basis (and in some cases are established outside of the EU), and are often difficult to locate, needs to be strengthened”.

The current legal framework provides for civil forms of redress only in cases of digital theft.

Brian says that the only reason he illegally downloads is that otherwise he wouldn’t see the show. “I can't revolve my life around watching TV shows when it suits networks to display them,” he says.. “This method is the only one that gives me control over when I watch them. I accept that Sky have a watch-it-later facility for some shows, but not everything is covered this way, and the cost of Sky just to watch a single show would be madness.”

He acknowledges the criticism  that what he is doing is unethical as well as illegal. “I completely understand the right of content creators to make money from what they do,” he says. “I make myself feel slightly better by thinking that if I couldn't download these shows I wouldn't watch them legally, so it's not a loss of revenue, but I accept that it's a poor argument.”

He would happily pay per episode to be able to watch the show on a Netflix-type service. “But at the moment the legal way to watch these shows is also the hardest, the one I have to go out of my way to do.”

You really have to see Trump’s bizarre new painting
4