Westworld: Latest twist in a show that knows us too well

Review: Series two of the sinful – but cerebral – entertainment keeps us guessing 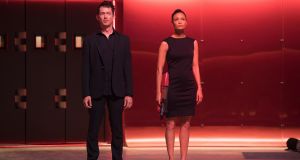 Season premiere. The puppet show is over, and we are coming for you and the rest of your kind. Welcome back to Westworld

Whatever you think about of Westworld (Sky Atlantic, Monday, 9pm), the labyrinthine sci-fi about a robotic western theme park run amok, it doesn’t quite compare to what Westworld thinks of you.

Based on Michael Crichton’s 1973 film, in which hapless humans were hunted by relentless androids, Jonathan Nolan and Lisa Joy’s TV version flipped the perspective, making the robots – gamely known here as “hosts” – a kind of slave labour to unchecked human urges.

If Westworld “shows you who you really are,” as a retreating, clean-cut young fellow called William (Jimmi Simpson) was originally told, the show also provided a mirror to its viewers. Indulged with acres of naked flesh, gallons of blood, byzantine narrative puzzles and stabs of self-reference – all the things that define prestige television – we too were “guests”, reassured there was cerebral nourishment within a sinful entertainment.

Among the many twists of the first series, which manoeuvred through a maze of non-linear narratives, was to show us, eventually, who William really was: destined to become the grizzled, soulless Ed Harris, as the blackest of the black hats, who swept the park for a hidden, deeper game. It’s unclear with the return of the series whether we’ll find one, but the good news is that it is no less absorbing.

It begins with an interview, of all things, apparently between Delores and Jeffrey Wright’s bewildered back-room tinkerer, Bernard, as they ponder reality. “That which is irreplaceable,” he ventures.

Given that Bernard discovered himself to be a machine, modelled on Westworld’s godlike creator, Arnold, it’s hard to say who is really talking here, or when the conversation happens. “Is this now?” Bernard asks, in the aftermath of a robot uprising. Westworld likes to keep you guessing.

It would prefer to keep you watching, though, now splitting into three quests and ushering in crossover characters from other theme parks. Delores, now a one-note destroying angel of eerie calm, is out to overthrow all human tyrants with James Marsden’s corn-fed gunslinger Teddy in tow.

Thandie Newton’s fully woke Maeve is spearheading a more arresting underground resistance, but still pursuing a fiction – the separated child in her character’s backstory. And Harris’s William, much to his satisfaction, is now playing a game with the safety catch taken off, full of danger, and designed, he is told, just for him.

The show is similarly well pitched, sumptuously shot, archly aware of both itself and its audience, and evidently keen to reboot. Anyone alert to the politics of nudity will appreciate that the most gratuitous example here features a man with a prominent speaking role. The female leads and minor characters, one of them described by a perplexed military man as “the welcoming wagon”, are now leaders and fighters, dressed for the occasion.

There is even a shiver of Cambridge Analytica in the catacombs beneath the park, where “guest” experiences and DNA have been secretly mined. The violators have become the violated.

That all suggests that Westworld is gunning for righteous vengeance, and that may be the latest twist in a show that knows us too well.

Stay tuned for the grisly comeuppance of mankind’s ugliest desires. It’s what you want to see, baby.