North Korea’s Secret Slave Gangs: ‘You’re treated like a dog and you have to eat trash’

Building sites in Europe, Russia and China are mass-exploiting workers from North Korea 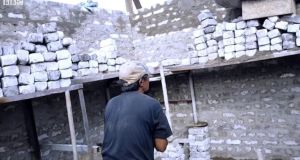 North Korea’s principal exports were once minerals, metalwork and arms. These days, it’s slave labour. That is the finding of a new Panorama broadcast, North Korea’s Secret Slave Gangs (BBC One, Monday, 8.30pm), a co-production between three international investigative teams, which has put more thought and effort into its reporting than its title.

To clarify, there are few gangs involved. The export of about 150,000 North Korean workers to building sites and shipping yards in Russia, China and Europe is state-sanctioned, incredibly lucrative and morally obscene for every nation involved.

“They are an export commodity,” reasons Tom Keatinge of Royal United Services Institute, “supporting the nuclear ambition of the leadership.” Earning more than a billion euro a year for the regime, which also goes towards keeping dictator Kim Yong-Un in the strained-smile luxury to which he is accustomed, slave labour is a significant source of revenue for an economically ravaged nation, crippled with sanctions, with about a quarter of its population at the starvation level.

Over the decades, Panorama’s investigations have acquired an almost unbudgeable form: urgent talking heads, a thrum of dramatic music, investigative journalists conducting sting operations behind the judder of concealed cameras. Here is it put to use to talk directly to the workers, when the team visit an apartment construction in Vladivostok, posing as prospective buyers.

“You’re treated like a dog here and you have to eat trash,” one of them eventually confides. “That is what working here means.”

Actually, it’s even worse than that. Relinquishing the bulk of their wages to a “captain”, a North Korean boss who funnels the money back to the regime, they must also pay a “party duty”, or a “revolutionary duty”, from whatever they are allowed to keep. It’s an abhorrent thought; exploited workers who must pay for the privilege. (When one worker admits that even this is better than life in North Korea, you get a sense of unimaginable hardship.)

“They’re like us during communism,” a Szczecin security guard admits casually, as though Solidarity was just a dim memory, to a journalist posing as a Polish contractor.

The nationalist Polish government has drifted steadily away from European regulations, and when confronted with irrefutable evidence of Polish companies illegally employing and exploiting this North Korean workforce, government representatives merely deny that it is happening.

Sitting outside a sunny café, filming secretly, the journalists hear from a Pole who runs a clandestine company called JMA, which supplies North Korean workers (advertised coyly as “Asian”). “People say this is supporting the regime, and they don’t like it,” he rationalises.

“But on the other hand, if ordinary workers get something out of it – whether they get some is another question – but if they get anything, that’s a good thing. Because they get a glimpse of the world.”

That world makes for a very ugly sight.