War of Independence documentary will tell us ‘the history we think we know, but don’t’ 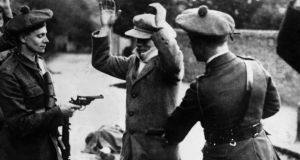 Black and Tans hold a suspected Sinn Féin member at gunpoint. A fallen man lies in the background. Photo by Hulton-Deutsch Collection/Corbis via Getty Images

The story of Ireland’s pursuit of independence is an old one which needs retelling for a new generation. The Irish Revolution is a three-part documentary on RTÉ 1 to be broadcast on Monday February 4th. It covers events of those tumultuous years between 1912 and 1923.

The first part tells the story of how a group of young revolutionaries who came of age in the first two decades of the 20th century changed Irish and British history forever.

The second and third episodes are about the War of Independence and its bitter aftermath. The series uses archive footage, contemporary interviews and a lot of drone footage.

A key new element in the documentary series is the animated graphics based on the bestselling Atlas of the Irish Revolution, arguably the Irish publishing phenomenon of the past decade.

The second episode was screened at Cork Opera House last week, to an audience that included President Michael D Higgins.

Director Ruan Magan says: “We are presenting people with their own history. It’s the history we think we know, but we don’t really know. Nobody has put the pieces together like this before.

“You are presenting people with their own history. It’s the history we were kind of taught in school, but not in any great detail.”

The series is narrated by actor Cillian Murphy, known for his role in Peaky Blinders and the War of Independence drama The Wind That Shakes The Barley.

The documentary series was originated by RTÉ and UCC, publishers of the Atlas of the Irish Revolution. The tendering process for the documentary was won by Tyrone Productions and Magan’s production company, Create One.

The archive footage for the The Irish Revolution cost €150,000. The research team found several interviews from the landmark 1970s series Ireland: A Television History which had not been used in the programme, but will feature in this documentary.

Magan says the documentary highlights two things that are not always apparent from the history books. The first is how far Dáil Éireann went to gain international recognition for the Irish Republic at the Paris Peace Conference and then through Eamon de Valera’s marathon tour of the US in 1919 and 1920.

“The majority of people living on the island of Ireland had reached a point where they couldn’t accept foreign rule,” he says.

“It wasn’t a military defeat ultimately. It was a people’s revolution with them saying, ‘we won’t serve you in shops, we won’t drive your trains, we won’t respect your courts’. It was that which ultimately defeated the will of the British to remain.

“There is a quote from Sir Alfred Cope (Assistant Under-Secretary in Ireland) in episode three in which he realises that the British are defeated. It wasn’t so much that they had to beat the IRA. They had to beat the entire Irish people.”

Magan says the documentary will make clear how many events of 100 years ago are still playing out today.

“Isn’t it interesting how the word ‘remain’ was equally being used 100 years ago by our brethren in the north of Ireland, and they had a very good reason for doing it, which was an economic reason. That continues to play out today,” he says.