Two Weeks to Live: Maisie Williams’ dark comedy is too much standard-assassin 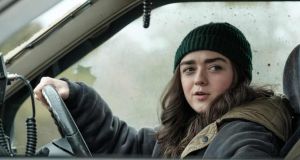 Now we know where Maisie Williams went after playing Ayra Stark in Game of Thrones: as Kim, she headed into the in Two Weeks to Live. Photograph: Sky

Two tropes thread through the first episode of the new comedy drama series Two Weeks to Live (Sky One , Wednesday): what would you do with just a fortnight on earth, and what would you be like if you’d been cut off from “civilisation” and brought up in isolation. Now we know where Maisie Williams went after playing Ayra Stark in Game of Thrones: as Kim, she headed into the wilds with her doomsday-ready mother (Sian Clifford from Fleabag), who taught her survivalist skills from age six (“gloves and a gun if you want to have fun”, says the trailer). The mammy comes in after a hard day’s landscape painting and shooting with a dead deer over her shoulder, calling “Kim, it’s your turn to disembowel dinner when you’ve got a sec”.

Kim is a young misfit, a hero both kickass and naïve, who leaves the hut in the woods aged 21 on a mission to avenge the murder of her father, which she witnessed as a child, and to tick off some items in her fat notebook of Things to Do in the Real World. Cue some great fun as her lack of worldliness collides with outside, and she guilelessly says what’s she’s thinking.

A café owner fleeces her because of her innocence with money. She amusingly topples all over the place twisting ankles trying stilettos (“This is definitely a shoe? I just feel like I made a fundamental mistake.”)

There’s a good bit convoluted and far-fetched plot behind this, some as yet unclear, involving the crime boss who topped her da, two squabbling brothers she befriends – one shy and sweet, the other a messer – who become embroiled, and the mother coming south to bring Kim home.

The two weeks left bit arises when the messer plays a joke, faking online news of impending apocalypse, which panics Kim into hastening her revenge mission. There’s a lot of hokum and fun (some of which tries too hard) with cartoon-y plot, a touch of Killing Eve, and a zippy script by Gaby Hull.

There is, however, a weird tone disjuncture in the opener. She’s led an isolated life, with little experience of the outside world – money, going to a pub, high heels, but she also has too much social poise and seems too worldly, chilling with a joint with the boys, offering astute observations on sibling relationships.

And we’re promised survivalist techniques like stripping a pistol in six seconds or skinning a deer to make a sleeping bag, so although she gets sweet revenge flooring the mean café owner, it’s slightly disappointing that when she heads off to avenge her father, rather than, say, lassoing and skinning the crook, she breaks into his house with a silencer-gun. Too much standard-assassin, too little survivalist-tricks-in-the-city, in episode one, so we’re expecting more kickass fun as this goes on.