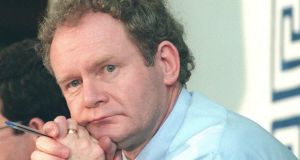 There’s a duality at the heart of McGuinness, both the documentary (RTÉ One, Wednesday) and the man himself. Martin McGuinness, who died three years ago aged 66, was both war maker and peacemaker; either terrorist or freedom fighter, or both. He lived, this nuanced, authoritative film says, a parallel, secret life beneath the surface.

“For two decades he embraced a campaign of violence without comparison in 20th century Ireland that resulted in thousands of lives lost”, but he was also a key part of a transition to delicate peace, later co-governing with former enemies.

“You either admired him or you thought he was the Devil incarnate,” says Denis Bradley.

In archive footage, we see the early leader, an attractive, singleminded young man, charismatic and respected in the Bogside through the maelstrom of civil rights marches, the “communal wound” of Bloody Sunday, and early involvement in the resultant IRA bombing of Derry.

There’s BBC footage of a masked McGuinness at an IRA training camp in Donegal, and chilling film of him loading a handgun, with the camera pulling back to show a huddle of small children watching in awe.

Denis Bradley talks about a saying, that if the IRA ever killed a woman, it’d stop the violence, then later if a child was killed it would stop. “But there were plenty of children killed and it didn’t stop.”

This complex and balanced exploration teases out that developing duality, a parallel track from early on: from secret talks in London in 1972, as the IRA campaign raged, evolving through the first realisation of the potential of politics, and a long period balancing both ballot box and Armalite.

Any epiphany in the mid-1980s about a political path was hidden. We see McGuinness’s public commitment to violence in his 1986 ardfheis speech denouncing any constitutional path as “shame, shame, shame”, although that was exactly what was beginning behind the scenes.

Ed Moloney observes that speech was “one of the ways the stage was set for an acceptance of duplicity”, of regular denials by McGuinness and Adams of being in the IRA. “Once you legitimise the telling of lies there’s no end to it.” Parallel realities continued for decades, with republicans privately discussing peace while the IRA waged open war.

McGuinness, produced and directed by Colm Bairéad and written by Harry McGee, explores path from the Belfast Agreement to McGuinness as deputy first minister for 10 years, sharing power with Ian Paisley and the DUP, meeting Queen Elizabeth and later standing as a presidential candidate in the Republic.

It includes strong contributions from a wide range of people, including former US president Bill Clinton (“He proved that someone who had spent a lifetime fighting could accept a victory that was shared”) and ranging from republican Mitchell McLoughlin to unionist Gregory Campbell.

Former UK prime minister Tony Blair describes noticing through the process leading to the Belfast Agreement, how McGuinness “changed his attitude in quite a fundamental way to those with whom he had been at war”.

A dignified Eileen Paisley describes his unlikely friendship with her late husband, Ian, as the “chuckle brothers” forged a strong working relationship. McGuinness continued to text Eileen until a few days before he died, testament to how far McGuinness travelled in pursuit of peace and reconciliation, she says.

Despite his repeated claims that he was not in the IRA after 1974, no one watching this film could doubt he was at the top of the IRA for many years after that, including as leader of its Northern Command and chief of staff (“a very popular appointment” according IRA member Kieran Conway ).

Several contributors say he held very senior leadership positions in the late 1970s and 1980s; former taoiseach Bertie Ahern says he always considered Martin McGuinness to be at the highest leadership level of the Provisional IRA until close to the time it disarmed in 2005.

Therein lies the other duality, of any sort of truthfulness. The moral gymnastics, the doublethink of regular denials of membership or involvement in the IRA may have been necessary to broker the historic peace, but continued to dog him.

In a clip from a presidential election debate, Vincent Browne points out most people believed he was lying when denying the IRA, and asks “how can they believe you will not lie about other things?”

Nonetheless, Ahern praises McGuinness’s straight-talking as a negotiator and politician. “Martin was very straight. Gerry/ [Adams/] would go around the mulberry bush several hundred times”. McGuinness was “far easier to interpret and therefore to do business with”.

Decades of pain created by the doublethink is starkly seen in the barbaric IRA abduction of Patsy Gillespie, forced to become a human bomb while his family was held at gunpoint. We see McGuinness justifying it, then saying it was not his responsibility to justify it, because he was not in the IRA. The added “tragic paradox” was that McGuinness was involved in secret peace talks even while the atrocity was committed.

Another of the many losers over the decades is seen in powerfully emotional testimony from Mary Hornsey, whose 15-year-old son was killed by the IRA in 1979 while working on Lord Mountbatten’s boat. She calls McGuinness a “puppetmaster in the shadows”, asking “How can he get people to do this dreadful work?”