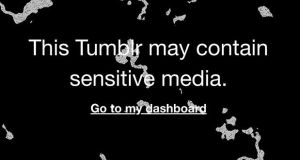 A warning on Tumblr about sensitive content. The ban comes into effect on 17 December. Photograph: Tumblr

Ballet dancers, superheroes and a picture of Jesus Christ have all fallen foul of Tumblr’s new pornography ban, after the images were flagged up as explicit content by the blogging site’s artificial intelligence (AI) tools.

The microblogging company, which is owned by the US media conglomerate Verizon, said on Monday it would ban pornography from its site – and defined the term as covering any depiction of “real-life human genitals”, or “female-presenting nipples”.

The move will alter how the social network is used and shows an increased desire by major media companies to restrict which content appears on their websites. Unlike many of its competitors, the microblogging outlet has always had a tolerant attitude to legal adult material since it was founded in 2007, gaining a reputation as a safe haven for adult-themed artists, sex workers, and pornographers. As a result adult material has flooded the service, where it sits alongside other fandoms for everything from Harry Potter to anime. Attempts to provide a “safe mode” for younger users have sometimes caused problems though.

The ban appears to have been prompted by the app’s temporary removal from Apple’s App Store in November, after the discovery of child abuse imagery shared to the site.Once the ban comes into effect on December 17th, any post containing imagery flagged as pornographic content, according to its parameters, will be deleted. But in order to moderate billions of posts in such a short timeframe, Tumblr has turned to AI tools that appear unable to distinguish clothed from naked figures, let alone tell whether a nipple is presenting as female.

The actor and Tumblr user Wil Wheaton posted one example: an image search for “beautiful men kissing”, which was flagged as explicit “within 30 seconds of me posting it”.

Other users chronicled flagged posts, including historic images of (clothed) women of colour, a photoset of the actor Sebastian Stan wearing a selection of suits with no socks on, an oil painting of Jesus Christ wearing a loincloth, a still of ballet dancers and a drawing of Wonder Woman carrying fellow superhero Harley Quinn. None of the images violate Tumblr’s stated policy.

As he announced the new rules, Tumblr’s chief executive, Jeff D’Onofrio, acknowledged the company would make errors. “Filtering this type of content versus say, a political protest with nudity or the statue of David, is not simple at scale.

“We’re relying on automated tools to identify adult content and humans to help train and keep our systems in check. We know there will be mistakes, but we’ve done our best to create and enforce a policy that acknowledges the breadth of expression we see in the community.”

The site insisted it would still allow non-sexualised images of women’s nipples, in situations such as breastfeeding or works of art, and said “artistic, educational, newsworthy, or political content featuring nudity are fine”.

But many users expressed dismay over the ban, arguing that Tumblr’s position as one of the last major sites on the internet where adult content could mix freely with more traditional social networking made it a valuable space for people to express their sexual identities in safety.

“It was a great place to mix art and adult content,” one user, Nyx Serafino, said on Monday. “I could put out my perspective on things, post a song, and feel comfortable in my own skin. It took a long time for that to happen for me.” – Guardian