Ryan Tubridy, as the ‘Greatest Showman’, will lead 200 performers in extravaganza 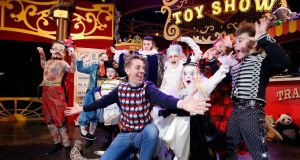 It was the promoter Phineas Taylor Barnum who popularised the phrase “the greatest show on Earth”.

That might be a bit of a tall claim for the Late Late Toy Show, but it is undeniably the greatest ratings winner on Irish television.

Last year it was once again the most watched programme in the country, with an average audience of 1.35 million. It was watched by 70 per cent of the available audience – who can’t all, presumably, be children.

It has also had a second life on the RTÉ Player and was watched in more than 100 countries.

This year’s iteration will have a circus theme based on the great impresario’s grotesque and often macabre 19th-century circuses which were such landmarks in bad taste and yet so profitable that PT Barnum once remarked that nobody ever went broke underestimating the taste of the general public.

The theme is timely given last year’s film on the life of Barnum, The Greatest Showman.

This year’s Late Late Toy Show will be a big tent in many different ways. It’s the most ambitious stage set to date. They say that every year, but this year’s has a unique configuration and is a genuine contender.

Presenter Ryan Tubridy’s “cavalcade of whimsy” – as it is billed – will feature 200 performers and 30 toy testers, the youngest of whom will be 3½.

Every year the Late Late Toy Show confounds the old showbiz maxim that you should never work with animals or children.

It will be Tubridy’s 10th Late Late Toy Show. It is hard to imagine anyone else doing it at this stage.

“If you ever wanted to get a glimpse of what I’m like in real life as opposed to the weekly thing which is just my job, the Late Late Toy Show is more the essence of me. I’m a messer,” he declares.

He will be “quote, unquote” singing in the opening number as PT Barnum and confesses to being genuinely nervous.

“I’ve never sung before, I’ve just acted the maggot. It’s one thing singing in a karaoke booth after a few drinks. It’s quite another thing doing so in front of a million people.”

For many the highlight of last year’s show was the never-to-be-forgotten moment when Sgt Graham Burke, who had been on duty with the Irish Army in Mali, emerged from a giant wrapped present to greet his three children.

“That was a game-changer for me,” said Tubridy. “It’s not about the silly stuff. It’s about the guys from the armed forces who can’t be there on Christmas Day emerging from a box for his family. It’s about kindness.”

It will be hard to imagine anything in this year’s show that will surpass that moment, but it is live television and anything could and does happen.

The Late Late Toy Show is about children and for children, but one place where they are conspicuous by their absence is the audience. Bizarrely, only over-18s are allowed. Apparently this is due to reasons of health and safety or, as Tubridy puts it, “elf and safety”.