The Simpsons, series 30: After 640 episodes it feels as out of date as The Flintstones

The show no longer reaches the heights of the 1990s. Maybe it should slip into retirement

Creators of The Simpsons have released a teaser for episode one of series 30, featuring Emily Deschanel and Gal Gadot. Video: Animation on FOX 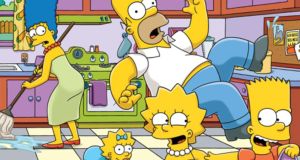 The folk behind Viz, the incorrigible adult comic that ruled the John Major years, used to joke that Mark E Smith, lead singer of The Fall, was the first person to suggest it was “not as funny as it used to be”.

They dated Smith’s grumble way back to 1986, a few years before anybody outside a tight huddle had heard of Sid the Sexist or Billy the Fish (and before The Fat Slags even existed). With typical self-deprecating cheek, Viz repeatedly put those words on the cover.

The Simpsons, which began its 30th season this week, arrived on television some time after Viz first launched, but the two entities shared a high period in the 1990s. Their reputations have gone in slightly different directions.

Grab a copy of Viz and you’ll discover that it is more or less exactly as it once was. Society moved on and left the Tyneside institution to the enthusiasts. The dread words “not as funny as it used to be” are more appropriate for The Simpsons.

Like many people, having once bowed to nobody in my devotion, I now dip only occasionally into new episodes. We veteran viewers tend to have an equivocal relationship with the later years.

The Simpsons never “jumped the shark” like the contemporaneous Roseanne or – the show that gave us that shark reference – the earlier Happy Days. Before it got into a different sort of trouble, the recent rebooted Roseanne stood as an apology for the notoriously appalling ninth season, which, after the family won the lottery, transformed one of the best shows on TV into one of the very worst.

By way of contrast, The Simpsons gradually slumped into tolerable mediocrity. It was an unimpeachable classic in the 1990s. It was fine in the first decade of the new century. Who the heck knows what it’s like now?

Returning for the first episode of the 30th season is an unsettling experience. The Roseanne reboot looked more like the original run than one could have expected, but the parents are now pensioners and the older kids are skirting middle age.

Animation need not give into any such withering. Though the images are sharper and more fluid, the characters look exactly as they did when they were quarrelling with George HW Bush or singing with an uncredited Michael Jackson.

Do teenagers now dress as Jimbo Jones still does? There is still a creaky hint of the “slacker” to Bart’s universe. Indeed, these characters seem almost as tied to their time as were the Neolithic Flintsones.

The story does, however, still follow that signature Simpsons structure: we begin in one place and end up somewhere entirely different. The opening gags are all about Bart’s brave decision not to ruin Lisa’s saxophone recital when “dared” by his rougher friends.

Slagged into submission, he accepts another dare to jump off The Springfield dam and seriously injures himself. In order to deflect criticism, he invents a story about meeting god in the afterlife that attracts the attention of “faith-based” movie producers. Soon, Bart is Dead is in production with guest star Gal Gadot in the role of Lisa.

The poignancy that charged the early years is gone. The staggering narrative invention is no longer there. But this episode still delivers more killer lines than whole series of later smashes such as Two and a Half Men or The Big Bang Theory.

Bart mentions that he met Abraham Lincoln in heaven. Homer asks him if he met any other presidents there. When Bart says Lincoln was the only one there, his dad confirms: “Well, it was heaven all right.”

The digs at religious cinema are good. The digs at DC movies are even better. It ends satisfactorily.

It might actually be easier to cope with The Simpsons if it really had turned full-on rotten. It’s continuing existence as a so-so, occasionally diverting incarnation of its earlier self renders it a hard entity to classify. It has now been ho-hum for at least twice as long as it was a vital element of the cultural landscape.

The best comparison is probably with one of the great 1960s bands – The Who sound about right – that continued to tour long after their glory days. A relatively brief period of fecundity led on to decades of satisfactory resurrections of the tunes that made them famous.

Bart makes with the quips. Lisa remains smart and superior. Homer still likes beer and long sleeps. It would be a shame if the band died, but maybe they could slip politely into retirement.

The appeal of Phil Collins? It's his friendly, happy face
9