A tale of two brothers: ‘Philly stayed with football. John went into drugs’

‘I’d give up all my All-Irelands to have him back,’ says Philly McMahon of John 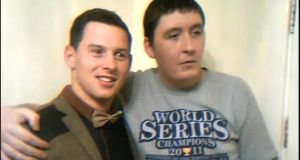 This is a tale of two brothers. There were, Val Caffey says, two roads that her sons followed: “Philly stayed with football and John went into drugs.” That makes them sounds like polar opposites, two utterly different men.

But nagging at Philly McMahon: The Hardest Hit (RTÉ One, Sunday, 9.30pm), a documentary on addiction and McMahon’s work since his brother’s death with addiction support schemes, is the suspicion that these were just different expressions of a similarly obsessive drive.

“I didn’t understand John’s addiction,” Philly says of his older brother and one-time protector. “So I threw all my time and energy into playing.”

Whether football was his way to cope, or a way to withdraw from family stress in Ballymun, the crisis made McMahon what he is. The documentary doesn’t retreat from the shame and embarrassment that comes with being an addict, or from being related to one you cannot help, but the programme seems driven by what Philly owes John.

“It was the halftime talk of my life,” McMahon says of his brother’s death, in 2012, “and I knew I need to use my profile to help others.”

That metaphor is revealing: McMahon interprets many things through the filter of sports. The work he does with Mountjoy Prison, for instance, leading inmates keen to rehabilitate themselves through gruelling physical workouts, and giving his own inspirational “halftime talks” about changing their outlooks, suggests that rigorous physical discipline might be the only absorbing substitute.

His attention to the KCCP Reach Out Programme in Kilbarrack, where teenagers are coached through equally strenuous beachside footballing training, has some of the same logic – presented, by director Kim Bartley, with the same pummelling soundtrack.

“Sometimes when you’re not fit, you’re not thinking healthy,” says the Kilbarrack facilitator. That may be true, but it’s a long way for most mortals to go from the ruin of addiction to peak athleticism.

Perhaps McMahon wants to reclaim the word “tough”. The governor of Mountjoy, Eddie Mullins, admits that most addicts in prison (who are also most prisoners) come from “tough communities”. McMahon, born and reared in Ballymun, “the heart of the epidemic” in the 1980s and 1990s, might prefer that “tough” was synonymous with a sense of discipline.

You can understand why. McMahon is a self-made man, repeating his Leaving Cert under the influence of the GAA to go to college. In the programme, he meets young women in third-level institutions from disadvantaged communities (the documentary presents women as intellectual, men as physical).

McMahon tends to present his path as the correct one, with a tendency to stress his achievements even as he contemplates his losses: “I’d give up all my All-Irelands to have him back,” he says of his brother.

It’s hard not to wonder if he may also be trying to exorcise his own shame with that pride. McMahon admits that he changed his surname because he was ashamed of his brother. Val says that, initially, she wouldn’t tell people how her son died.

There’s no better expression of the anguish a family can feel than a woman they meet named Aileen, whose daughter, a promising academic, died last year after a long battle with addiction. “We have to forgive ourselves and know we did our best at the time,” she says.

That, sadly, is far from easy. Is it coincidental that the programme includes one reformed addict whose recovery was made possible by a rekindled relationship with his own brother? (Emmet Kirwan, the actor and writer who turned his own similar story of brothers uncannily reuinited into Dublin Oldschool, is thanked in the credits.)

McMahon’s sibling mission might be to repeal the shame of addiction; concentrating on Portugal’s path-breaking policies to decriminalise drug use and make addiction a health matter, then Dublin’s “Drug Court”, an alternative to incarceration for drugs offences, motivated by reform.

“At the end of the day the addict has to make the choice,” McMahon says, “but we need a policy that allows them to stay alive to make that choice.”

It helps that people listen to McMahon so intently: both Mountjoy’s governor and Dublin’s assistant Garda commissioner Pat Leahy look at him as though regarding an idol.

That’s close to how McMahon thinks the inmates see him: “These guys will relate to me,” he tells the camera. And guys do. They look up to him. On some level, they’re all looking for a brother.