The Nuncio and the Writer: A heart in Kilkenny, a mind on Croatia 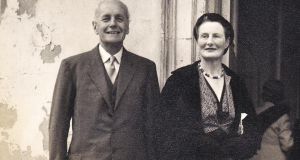 If the Nuncio and the Writer (RTÉ One, Tuesday, 10.35pm) seems like a documentary in a hurry, featuring a cascade of celebrated Irish and international intellectuals exalting another, whose recognition came late, that may be because it started life as a longer film. Johnny Gogan’s Hubert Butler: Witness to the Future premiered last year, and has now been whittled down to almost half its original length for an hour of programming.

One happy consequence is that Butler’s extraordinary history, his experiences and writings will again find a wider audience: it details the travels of a young Protestant Irish nationalist through wartime Europe, his subsequent efforts with his wife Peggy to help more than 100 Jews escape Vienna after the Anschluss, and his fierce commitment to investigate genocide, complicity and collaboration in the Balkans, particularly Croatia – to his personal cost at home.

So what emerges, essentially, is that Butler is regarded as a national embarrassment

The shrinking of the film creates the appearance of a television documentary given unusual attention – how many biographical hours have such elegant original soundtracks? – and yet one that has lost some structural focus.

The new title, for instance, refers to a horribly revealing juncture in Butler’s life, in which his outward-facing political consciousness was met with its opposite: an insular, parochial response. When Butler asked a question, in a public forum in the 1950s, that highlighted forced Catholic conversions in Croatia and the complicity of the Catholic Church in the genocide of half a million Orthodox Serbs during the second World War, the papal nuncio stormed out. Typically, it was the messenger who was shot. “So what emerges, essentially, is that Butler is regarded as a national embarrassment,” says his biographer, Robert Tobin; further ostracised as “this Irish Protestant from Kilkenny”.

That blacklisting still stings. Though Butler’s political essays, constructed with verve and clarity from the 1940s through the 1970s, made him comparable to George Orwell, finally finding exposure when the Lilliput Press rediscovered them in 1985, there is a near filial zeal among his intellectual inheritors to burnish his reputation today.

The documentary hasn’t decided who is leading that charge. The poet Chris Agee, for instance, filmed in Croatia, speaks as though following a carefully prepared script, like the film’s anchor. Joe Hone, Butler’s foster son (who died last year) reminisces in drifting anecdotes. Tobin, Olivia O’Leary, Fintan O’Toole, Lara Marlowe and Roy Foster are more extemporary and pithy. The words “of course” are deployed frequently, between facts and interpretations, as though the contributors imagine themselves addressing an audience of already familiar peers. Or perhaps they consider it too shameful that Butler’s work might still be a discovery.

The documentary is less fretful. This is a detailed and chronological biography of the man and his legacy, whose theme makes its own tribute: that one can be locally invested and internationally attuned. In Butler’s life the idea found expressions huge and small, such as his extraordinary investigation into the Irish sanctuary given to Andrija Artukovic, a Croatian war criminal, or the peculiarly satisfying explanation that his daughter, Julia Crampton, provides for his bad driving: Croatia was on his mind. That is a becoming portrait of an international Irishman ahead of his time, his thoughts on another road.

The Books Quiz: Who wrote The Naked Lunch?
6