From The Flintstones to He-Man and Top Cat, kids’ animation has a lot to teach us 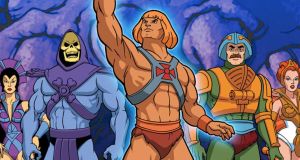 The cosmically nihilistic sci-fi comedy Rick and Morty is back (weekly on Netflix) and Netflix is also producing a fantasy series from Matt Groening, creator of The Simpsons. The latter is the show that made cartoons for grown-ups a staple of television. The former is the latest acclaimed iteration.

Yes, we’ve been enjoying the animated worlds of Beavis and Butthead, Duckman, The Critic, Daria (essentially the woman I married), Bob’s Burgers, South Park and Bojack Horseman for so long, we’ve perhaps forgotten the children’s cartoons that shaped us (and continue to shape us, if, like me, you watch Cartoon Network). What dark messages lurk within?

The Flintstones and the Jetsons
Like the book Sapiens by Yuval Harari, these two cartoon series document the ascent of man from primitive Stone-Age times, when cars were foot powered and you could mix cement in the mouth of a pelican without killing it, to a far future of flying cars, robot butlers, jobs for life, heteronormative family groupings, Google Glass and talking dogs.

I know. It seems wacky. I was sceptical before the Trump administration but now I accept that that is clearly the stupid past from whence we came and the stupid future to which we are headed.

Comparatively speaking, Top Cat is benign enough. He’s a sort of tramp who lives out by the bins. He is accompanied in his illicit endeavours by his pals Fancy- Fancy, Spook, Benny the Ball, Brain, and Choo Choo – which are, coincidentally, the names of your children – and thwarted by that tireless public servant Officer Dibble. Additional information: I often sculpt my cat’s cheek fur so that she looks like Top Cat. She won’t wear a waistcoat, however.

Other semi-clothed animated animals
(Okay I’m channelling my inner Myers for this one.) Explain this libernazis: when I rave incoherently wearing nothing but a sailor’s shirt and hat, children weep and policemen are summoned. But not Donald Duck when he angrily rants, sans pants. Oh no. He, apparently, is a figure of charming hilarity in his semi-nude apoplexy.

Once again there seems to be one rule for man and another for easily annoyed animated beast. And it doesn’t stop there. There’s also Mickey Mouse, with his gloves and hotpants combo; Yogi-Bear, with his barely garbed food lusts; and don’t even get me started on Pluto, chained and naked in a doghouse, while his species-mate Goofy wanders clothed and free. When I chained a naked man to my doghouse it was treated like a crime. It’s political correctness gone mad, I tells yah.

Scrooge McDuck
He laboured away in obscurity dressed in a satin dressing gown, top hat and spats, hording gold in the vaults of his mansion (Goldman Quacks?). In retrospect, he was an unsurprising choice for communications director with the Trump administration. Hard work pays. Originally created by Ayn Rand.

Fireman Sam
A dark allegory about the nanny state. In each episode, Fireman Sam spends his time preventing the denizens of seaside hellscape Pontypandy from going on fire.

This is a bigger problem than usual because of the moral hazard that comes with having a publicly funded fire brigade. By the rules of evolutionary biology most of the feckless residents of Pontypandy (especially that gibbering fool Norman Price) would be dead long ago if not for Fireman Sam’s misplaced concern and your hard-earned tax money.

The private-sector remake Fire Consultant Sam is much more cost-effective.

In the interests of balance, of course, there’s also Paw Patrol where the emergency services have been outsourced to a child businessman and a workforce of dogs (presumably not covered in current labour law). This may be taking things too far. I prefer to dwell on the entrepreneurialism and can-do-it-iveness of Bob the Builder. Manipulate those tax breaks, Bob!

The Moomins
An excellent Tove Jansson-created documentary about Finland and the Fins.

Adventure Time
This ongoing tale of a small boy’s adventures in a terrifying but magical land provides my mindscape with just the combination of apocalyptic majesty, ukulele music and talking dogs I need to get through Irish Times editorial meetings.

Tom and Jerry
The hilarious rivalry between this prosaically named cat and mouse gave me the unrealistic notion that survival in the animal kingdom was hilarious altogether. The other day I saw a heron in the Tolka trying to eat a live rat. It wasn’t funny at all. Far from it.

He-Man
Originally titled The Crisis of Masculinity, He-Man and the Masters of the Universe was the tale of a foppish prince who, when he held a glowing phallic symbol aloft and said “By the Power of Grayskull”, magically transformed into the very same person but with bulky underpants and no shirt (Hashtag: Body positivity). (Hashtag: yourself when you’re trolling the internet).

No one recognised him with his shirt off, so He-Man spent his time thwarting the schemes of a skull-headed project manager with a surprisingly muscley body (played by Matthew McConaughey). His name was James Skeletor. Sorry. His name was just Skeletor.

He-Man’s friends included both types of man: the man who was defined entirely by his job (Man at Arms); and the man who wore a sort of fedora and floated around being frightened of everything (Orka). Oh, and his sister was called She-Ra, making this programme a master class in gender essentialism.

Mr Benn
A bowler-hat wearing everyman drops into a magic clothes shop where he dons fancy dress and imagines another life (knight/spaceman/pirate/essayist/social media influencer/life coach) before proceeding on his way to work. Never since has a man having a midlife crisis been so entertaining to small children.