Amazon Prime’s fascist-America drama may not capture the zeitgeist perfectly, but it’s not far off 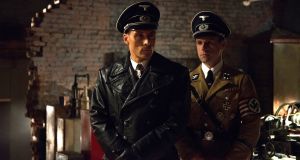 I’ve got a hot take, and it’s this: 2016 was a disappointing year. I know, this scorching insight seems too hot to handle, but hear me out. The world remained at war, unseemly political currents delivered populist movements around Europe, and Death himself stalked the Earth armed with a scythe, a pencil, and that list you wrote in your teens of every human you ever truly loved.

With all this geopolitical upheaval, what better way to get away from the news channels than by turning to a TV series about a fascist America run as a proxy to a foreign power?

Yes, Amazon’s immersive alt-history thriller The Man In The High Castle returned to the platform near year’s end as one of 2016’s final cultural offerings. The show, based on the Philip K Dick novel of the same name, is set in an alternate 1960s in which the Axis powers won the second World War and divided the US into two main sections; a Japanese-occupied West coast centred in California, and a German-occupied East centred in New York.

After a lukewarm start, High Castle’s first series gathered pace and its second is a delight, with a pleasing mix of nuanced performances, schlocky plotting and a gloriously exploitable central premise, although through no fault of the show’s own, the Nazi stylings and refugees-in-America narratives seem, sadly, more prescient than they did during that first season.

Alexa Davalos and Luke Kleintank return as underground figures navigating the country in pursuit of the titular castle-dweller – played by the always excellent Stephen Root – a mysterious figure who has been disseminating propaganda films that appear to show a world in which the Allies won the war.

For all their charms, the show is once again stolen by arch-villain Rufus Sewell as Obergruppenführer John Smith. Sewell has an unnerving knack for the steely gaze and the vice-tight facial clench, whether dressed in double-breasted Hugo Boss black, or – more chilling still – one of the disarming cardigans he wears around his suburban home. The show canters nimbly between the small-scale drama of personal loyalties and motivations to the broader, large-scale threats of nuclear war.

No sh*t Sherlock
Meanwhile, the BBC kicks off 2017 with its own flagship literary adaptation, Sherlock, itself set in an alternative reality where two men can consistently turn down work and still live in a £6 million flat in central London. Sherlock’s latest adventure suffers a little from the gap in scheduling of its leads, who haven’t had a proper canonical case together in three years.

This may explain the strangely stilted air to proceedings, which bears the tinge of a victory lap. In its pomp, Sherlock’s killer app was its deftly constructed, beautifully presented brain teasers, but in The Six Thatchers, as with the show’s last few outings, these puzzles are either strangely absent or casually dispatched within minutes of being introduced, amid a wash of references to the books and in-jokes for fans.

There are moments were it seems the show’s stars are pausing in anticipation of the inevitable cheers and high-fives set to ripple through living rooms, each time Watson scratches his head in annoyance, or Cumberbatch recites a solemn passage of poetry over shots of Sherlock walking slowly through London.

At its most self-satisfied, this first episode feels likes one of those Comic Relief sketches where TV shows parody their own tropes. You know the type: Bono presents Bargain Hunt; the cast of Hollyoaks murder Mr Blobby in a van fire. Sherlock’s fourth season still has two more episodes left so there is still time for it to hit the form it enjoyed during its imperious first two series. But so far the show is largely treading old ground.

Fresh meat
But never fear, novelty hounds. If you’re sick of the same old adaptations and tired of rip-offs and retreads, there is still plenty of brand new reboots and revamps coming this year.

Set to debut this week is NBC’s Emerald City, the grim, dark and edgy retelling of The Wizard of Oz that no one asked for but we’re getting anyway.

Pros: If not something actually good, any idea this patently terrible has the potential to make something interesting.

Cons: Literally everything else. Presumably ordered by the same calibre of genius who decided that Superman only really works as a miserable flying death machine.

Prediction: The line “I guess we’re not in Kansas any more, Toto” will be drowned out by gunfire, punching.

Pros: The MTU has been remarkably consistent for the past few years with Daredevil, Jessica Jones and at least the first seven episodes of Luke Cage providing excellent viewing from the studio’s less flashy, second-tier cast of characters.

Cons: The Iron Fist himself, Danny Rand, is in that Batman/ Dr Strange tradition of privileged white guys in comics who return to the big city from the East with incredible punching- people powers. Scaling this to 21st century mores may be a tricky task, not least as many fans had hoped that the role could be changed to fit an Asian-American actor, rather than the distinctly Anglo Finn Jones, best known as Game of Thrones’ Loras Tyrell.

Prediction: He will at some point have a head wound looked at by Rosario Dawson while she wonders if she’ll ever treat a non-superhero patient again.

Then in April, cometh American Gods. Neil Gaiman’s epic fantasy depicting gods as they live and breathe in contemporary America finally gets its big-budget debut.

Pros: The original book is a masterclass of wry satire and straight-up fantasy thrills, and showrunner Bryan Fuller has previous for creating moody, atmospheric and thrilling fare with the late, lamented Hanniball.

Cons: It’s hard to know just how to pitch a story of this magnitude in a weekly show, or how one would stretch it over multiple seasons. Also, there’s a leprechaun in the story and those rarely go well.

Prediction: The leprechaun may not go well.

Finally, at some point in 2017, should we not have been annihilated by first-strike nuclear weapons, we will apparently get another look at Twin Peaks. Remember Twin Peaks? Well this is it, back again.

Cons: The nuclear winter thing is making me think we need a confirmed date of broadcast.

Prediction: If this is good, then we’ll watch every episode through the radiation poisoning.

Why I Love: Michael Ondaatje’s Running in the Family
10