The lives of sex workers, with all the boring bits left in 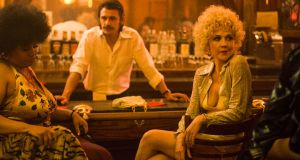 ‘Who would have thought the most boring thing about this was the f**king?’

Ruling on whether or not a film qualified as obscene, in 1964, one US Supreme Court Justice was famously candid about his definition of pornography: “I know it when I see it.”

As The Deuce (Sky Atlantic, Tuesday, 10pm) begins its second series, in a lovingly scuzzy recreation of the sleaze rush in late 1970s New York, many more people are free to see for themselves.

“Who would have thought the most boring thing about this was the f**king?” Candy says, lying back inert on an office desk before a shoot, and the camera hovers above her as though she was on a slab.

The Deuce doesn’t try to strip the sex from its story – how could it? – but you could hardly call it titillating: the witty conceit of the first episode is how difficult it is for the heroes to get any.

Vince, chasing after his brother while trying to keep the mob sweet, barely has a moment with his squeeze Abby, now running her own bar. Lori (Emily Meade), an emerging star, is mostly compromised by her slick pimp, CC (Gary Carr), a flamboyant anachronism, now threatened by her new independence.

“Don’t forget to enjoy yourself,” one mobster tells Vincent, forever frowning over the urges of others. “That’s what it’s all about.”

He would say that; he views things from behind the glass. He doesn’t see the graft and struggle, the suggestions and frustrations, behind the scenes.

Sex work is work, the series knows. It’s ready to show you everything.