‘The Apprentice’ is the most Brexit of TV shows, living in a landscape of denial

Exhibit A: Tory boy Elliott Van Emden who can barely disguise his glee when describing his job of evicting tenants 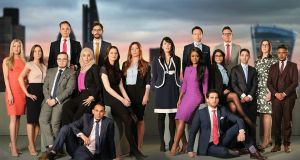 The Apprentice: nothing has changed inside Shuggsy’s Boardroom That Time Forgot

It’s the13th series of The Apprentice and unlike its reality telly contemporaries chopping and changing their format while desperately trying to stay relevant, absolutely nothing has changed inside Shuggsy’s Boardroom That Time Forgot. It’s a bit like your granny’s “good room” but instead of bottles of dead red lemonade from 1987 and pictures of smiling grandkids there’s piles of dusty email-phones and dart boards featuring Piers Morgan’s grotesque minced features.

Mercifully, there’s been no sexing up of Lord-Sir-Alan-Amstrad-Spursy-Shuggsy-Sugar, no engaging with the youth market or any attempt made to conceal his utter contempt for this whole palaver. His permanently grizzled visage belongs to a man who is trying to work out that dodgy steak and kidney pie he had for lunch. The sound of his voice is now a familiar whinnying exhale of derision. The only joy he barely exhibits is when he sneers that he won’t be the one doing any of the work. It’s difficult to understand why we’re all still here, apart from our sadistic desire to see the office sociopath suffer.

Much like I’m A Celebrity, Get Me Out of Here!, The Apprentice is a game-show that appeals to our sinister joy in seeing certain individuals humiliated. But instead of cackling at Timmy Mallett guzzling down a furry koala scrotum, the audience gets to revel in the common-place annihilation of nosey Linda from HR or the pathetically power-mad sales rep that stinks of Davidoff cologne.

The dastardly selection of self-assured blowhards are carefully compiled to stoke our ire. These days, they scarcely need to be prodded into making the most odious of statements in their visual CVs, with everyone attempting to outdo each other in their craven capitalistic tendencies.

Let’s not forget that this is the environment that spawned K*t*e H**k**s.

Take braying Tory boy Elliott Van Emden for example, who can barely disguise his Dickensian glee, practically bouncing on his car seat when describing his job of assisting landlords to evict tenants. Then there’s central-casting “eccentric” Elizabeth McKenna who delights in once being known as a scary debt collector. They are either remorseless ghouls hewn from day-old Daily Mails, sewn together with swan’s blood and Kilroy-Silk smarm, or flinty-eyed, soulless boys-and-girls-done-good whose bones are made of coal dust and diamonique. We wouldn’t have it any other way.

This cavalcade of contestants are the first to take part under the spectre of Brexit, which is referred to briefly from the outset (as if introducing a recurring villain that will resurface throughout the series). But Shuggsy assures them that he’ll be the only one choosing who will “remain”.

In fact, The Apprentice is the most Brexit of TV shows, existing in a vacuum, a landscape of fantastical denial. It bears no relevance to the bona fide business world of terrifying trade deals or ping-pong playing start-ups. It is a jingoistic roadshow that barks about empires and profits with the cameras twirling around London landmarks such as the Gherkin and Embankment. But in reality, it’s mostly shoddy MDF fittings in a windy industrial estate. Every task may as well see the contestants running around attempting to offload a job lot of teeny-tiny Union Jack flags to unsuspecting punters. It’s an economic entertainment show in the same way that Monopoly is a banking board game.

This week’s task is a standard Apprentice challenge: making and flogging burgers. It’s the Generation Game episode, full of production-line mishaps where someone will always miscalculate the ingredients and everyone eventually realises that they don’t know how much anything should actually cost.

There is lots of talk of “best of British” produce but the girls’ team – Graphin, you know that tough as nails but thin wonder product – who are supposedly making luxury burgers end up plumping for some cheap chicken from Holland and steak that is pummeled into a gooey paste by bumbling florist Elizabeth, who is working out some inter-team frustrations.

Typically, in the early episodes, the women tend to smother their outward hostility, and present a united front until they reach Mam-at-Christmas breaking point around episode three. But this year’s bunch are bolshie from the off. Early fave, Bolton construction czar Michaela Wain is the most interesting prospect, possibly because it will later be revealed that she’s Heather Mills in a joke shop glasses and red wig.

The faux-friendly facade of the team cracks when self-proclaimed “potty” Elizabeth goes head to head with malfunctioning cyborg Siobhan Smith, a torpid “destination wedding planner”. Siobhan, not quite recovering from an earlier mauling from Karren Brady for insinuating that the sub-team should be a bit of window-dressing for the Canary Wharf business bros, trains her laser-beams on her fellow contestantn.

She loudly dismisses Miranda Hart mannequin Liz as “faffy”, then almost pulls her arms from her sockets while manhandling a box of burgers away from her. This seething resentment is overlooked by supposed detail-oriented project manager Sarah Lynn, who cheerily matches them up to flip burgers together. It’s a flame-grilled feast that Apprentice dreams are made of.

Meanwhile the boys’ team, which they have christened Vitality, like a guarantee on a can of dog food, with their thick necks and protein powder sheen, opt for the “healthy” option of buffalo and turkey burgers. So far, the boys act as a shouty, amorphous blob like errant members of football soap Dream Team mixed with the anonymous faces from the band Hot Chip. They communicate in a series of “Ois” and back-slaps with talk of “smashing” the girls until rogue blob Charles Burns attempts to pull-rank and his constant chippiness threatens to unravel the group.

In the end, they’re all to be found almost weeping in butchers’ shops before discovering who faces the fate of slurping grey tea in the Bridge Cafe.

It’s good to have them back.