Television: ‘River’ is pitch perfect. But please don’t bring it back 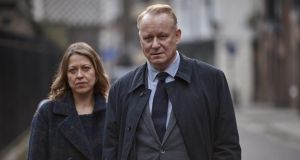 Take me to this River: Nicola Walker and Stellan Skarsgard in the most intriguing crime drama on TV this year

It’s rare that the final episode of a drama is as brilliant as the first, but everything about River (BBC One, Tuesday) this week is pitch perfect.

The entertainingly inventive take on the police procedural is written by Abi Morgan. Its stellar cast is led by Stellan Skarsgård as John River, a London detective haunted by the murder of his partner, Stevie (Nicola Walker) – a fun, sparky character to his troubled, silent one.

Stevie, like others River believes he has failed, literally haunts him, appearing by his side as a manifestation of his grief and guilt until he solves the case. As the series wraps up, the red herrings of earlier episodes disappear, and the detective work – spoiler alert – leads to Stevie’s dodgy East End family as the cause of her death.

In the first episode an Irish matriarch, Bridie (Sorcha Cusack), is simply Stevie’s grieving mother, but slowly she emerges as a horrible character with a dark family secret, a woman whose survival instincts underpin a deadly pragmatism. It’s a hard-hearted interior behind a hard-faced exterior, and Cusack gives a chillingly nuanced performance. Bridie is not the typical TV Irish mammy.

And there’s Uncle Mickey (Jim Norton), who came over on the boat with Bridie’s husband. Now complacent and secure in his suburban mansion, Mickey justifies to River his trade in papers for illegal African migrants (which Stevie was about to reveal) as payback for his own reception in Britain, where he was met with “no Irish, no coloured” signs.

Just as in the first episode, in which Stevie goads River to join her singing the cheesy disco hit Love to Love, the last episode ends with the surreal scene of an ecstatic, unhinged River dancing in the street with a happy Stevie in his arms. As the song plays, passersby on the bus see River swirling around – his arms empty. If you don’t have a little lump in your throat at that point you’re a right Bridie.

River feels complete, with no loose ends to leave the way open for a second series. Which is good. I love the writing and the cast – the leads as well as Lesley Manville, as River’s boss, and Adeel Akhtar, as his new partner – and I think it’s the most intriguing crime drama on TV this year. But a follow-up would ruin its magic.

As everyone’s a sucker for what-happened-next stories, it’s a wonder that a follow-up series based on Joe Duffy’s daily radio phone-in show, Liveline, took so long to appear. A TV series is not, perhaps, the obvious option – radio on TV? – but Liveline: Callback (RTÉ One, Tuesday) works.

Inevitably, it gets stuck for visuals: there’s no need for anyone to see that broadcast mast as frequently as we do unless it’s in your back garden. And although we see Duffy and his team at work in the studio, it’s a pity they don’t talk about their jobs, which have to involve a lot of gatekeeping when it comes to keeping rambling bores, or callers about to fling costly libels down the airwaves, off the phone.

Callback is all about people and their stories. The ones picked for the first episode are strong, reflecting the programme’s rattlebag of subjects, which mixes issues of national importance with shaggy-dog yarns. It’s easy to slag off the “talk to Joe” phenomenon as a whineline, but Liveline’s ability to stir up controversy and influence at the highest level is undeniable. Not every day, by any stretch, but some days.

The story, from 2007, when an inmate at Portlaoise Prison called Liveline begins with predictable interviews with two television regulars: the newspaper crime reporter Paul Williams and the former prison chief John Lonergan. I nearly switch off. If Liveline is about anything it’s about people who normally don’t have a voice being heard, and these two men are familiar faces. But it’s a meaty, revealing story of how a political controversy about prison security blew up on foot of that talk to Joe.

Michael McDowell, the outraged minister for justice of the day, was allowed into the studio by RTÉ to make a statement without taking calls. Duffy felt that it was “direct party-political interference”, and he doesn’t hide his displeasure.

“I was absolutely furious about this caving in to political pressure,” Duffy says, adding that he was “incredulous” at being “called in by management and given a dressing down”.

The follow-up to the Cathy Durkin story features her sisters, and it’s sad and powerful. Durkin is the woman whose Liveline story about not getting access to a cancer drug because of its expense made headlines and reversed Department of Health policy. It came too late for Durkin, but Liveline: Callback interviews a woman who benefited from her intervention.

If Callback steers clear of faces we already know too well and instead puts faces to callers’ voices, then this series, bursting with human interest, could run and run.

Mindful of my colleague Mary Minihan’s funny opinion piece this week about why it’s hard to be a Nordie, and how people from the North are “regularly and unfairly characterised as chippy, miserly and even aggressive”, I resolve to watch more BBC Northern Ireland – and so tune into True North: Will’s Kitchen (BBC One, Monday).

The half-hour documentary follows 14 months in the life of Will Brown as the 27-year-old strives to bring the restaurant in his parents’ rural Co Down B&B up to Michelin standard. We see Brown in the kitchen; he shouts a lot and curses generously, and you wonder who would sign up to be shouted at all day at work. “I reshuffled the team,” he says midway. “To be honest with you they just weren’t talented enough.”

No Michelin star, but Brown does get a Bib Gourmand, a major achievement. Still, he’s disappointed. At a meeting with a mild-mannered restaurant consultant, he storms off because the man dares ask the provenance of his green beans.

“He pretty much pissed me off, and I’m easy enough to get on with,” Brown says, staring down the camera, and you think (sorry, Mary), What’s that about “chippy” and “even aggressive”? But we learn that Brown trained with Marco Pierre White and Gordon Ramsay. So maybe it’s not really Nordie nature but macho cheffy nurture.