Monty Python hits Netflix. Here’s what to watch and avoid

Some Monty Python is sexist, classist and unfunny. But, on the bright side of life ... 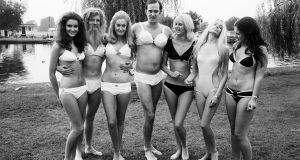 As Monty Python arrives on Netflix, we should, before singing the troupe’s praises, acknowledge the arguments against. It is nearly 50 years since the show was first broadcast. None of these complaints is new.

The “revisionist” arguments are so old they have themselves been several times revised. “Am I the only person who thinks Monty Python is … ?” You are not. As long ago as 1979, John Cleese named a briefly glimpsed guest in Fawlty Towers – the one inflating the sex doll – “Mr Ingrams” in honour of Private Eye editor Richard Ingrams, who didn’t find Monty Python funny.

Many disliked them at the time. Cult success led to mainstream success. Backlash followed. Then a backlash to the backlash.

First, it is true to say that the original show was fitful. Plough through the first series on Netflix and you will encounter large amounts of filler. There are long gaps of undergraduate silliness in the chasm that separates “Spam” and “The All-England Summarize Proust Competition”.

Secondly, nobody was lying when they said Python’s deranged tone owed a great deal to Spike Milligan, It’s That Man Again, Absurdist theatre and a dozen other circling influences. The series was, in particular, a direct descendent of Milligan’s Q5 series.

The Pythons’ odd creation did not arrive unheralded from one of Terry Gilliam’s God-stuffed clouds. The seeds were there in the Goons. (The seeds of the Goons are harder to trace.)

Nobody can easily deny that they had a problem with women. In the original series and in most of the films, women appear usually either as sex objects (played by Carol Cleveland) or shrieking grotesques (played by male cast members).

You could accuse Dickens of doing something similar – ogres or saints in his case – but that author was less inclined to view sexual assault as a hilarious gag. Men pursuing women is seen as an enormous lark in the original series. You wouldn’t have thought it of Michael Palin. He seems like such a nice fellow.

Yes, the humour is rooted in upper-middle class life. The American Terry Gilliam aside, all of the Python crew went to either Oxford or Cambridge.

Indeed, such was the influence of those universities that contemporaneous acolytes noted an “Oxford style” in the writing of Terry Jones and Michael Palin and a “Cambridge style” in the writing of Eric Idle, Graham Chapman and John Cleese. Apparently the former is more verbal and the latter more visual. It’s something to do with the dreaming spires.

All these things are true. The surviving cast members would admit all of these things. And yet Monty Python remains the most influential force on comedy in the post-war period.

The current Netflix batch includes a decent talking-heads documentary called Monty Python Conquers America. It begins with the team admitting that – despite the presence of Gilliam – they regarded it as a given that nobody in America would understand the show.

If you can endure that odd US habit of over-stressing the second syllable in “Python” you will hear the likes Judd Apatow, Hank Azaria, David Hyde Pierce explain how Monty Python changed their lives. For them, the class issue was irrelevant. All British people were strange.

The show inspired everything from Spinal Tap to Larry Sanders to The Simpsons. It seems baffling now, but the loud, brash, increasingly unamusing Saturday Night Live – topical in a way Python never pretended to be – sprang from its creators’ enthusiasm for Python.

It’s hard to argue with a team whose best works have bedded down so deeply in the culture. The Parrot Sketch was so ubiquitous it was quoted by a puzzled Mrs Thatcher in a speech about the SDP.

The line “What have the Romans ever done for us?”, from Life of Brian, is still dragged up to stress ingratitude to a cultural or political antecedent. You can’t escape Always Look on the Bright Side of Life. Can you? Can you? Answer me!

Sorry, you’re right. Nobody expects the Spanish Inquisition. There were eternal truths buried in the absurdity.

Life of Brian and Monty Python and the Holy Grail are not just packed with jokes, they are elaborately composed motion pictures that leave all televisual origins in the dust. Enjoy them again on Netflix.

The 2014 live show is probably best avoided by all but the most fanatical completists.

If you’re sick of the familiar then the one to go for is the brilliantly bizarre German version of the show. The two episodes of Monty Python’s Fliegender Zirkus combine translations of very English gags with some excellent jokes tailored for the Teutonic market. The running gag on Albrecht Dürer is particularly good.

It proves the lasting worth of Python. Like the recent Derry Girls and Young Offenders, it also confirms that humour travels further than we sometimes suspect.

The Netflix rundown – and ratings

Classic horror: the 10 most terrifying short stories ever written
6 Welcome to our online book club
7

The poisonous myth: Democratic Germany’s ‘stab in the back’ legend
Real news has value SUBSCRIBE