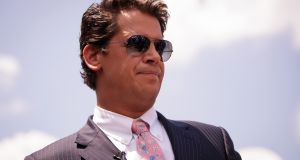 Milo Yiannopoulos, a conservative columnist and internet personality, who has been banned from Twitter. Photograph: Drew Angerer/Getty Images

Twitter has permanently banned a right-wing writer and notorious troll for his role in the online abuse of Leslie Jones over her role in the Ghostbusters reboot.

Milo Yiannopoulos, the technology editor for breitbart.com, tweeted as @Nero. Before he was banned, he had more than 338,000 followers and called himself “the most fabulous supervillain on the internet” for his provocations online.

A known contrarian who likened rape culture to Harry Potter (“both fantasy”) and affectionately referred to Donald Trump as “daddy”, he emerged as a spokesman for the “alt-right” in the wake of the Gamergate movement.

Yiannopoulos has been suspended from Twitter several times in the past for violating its terms of service, and had his verified status revoked earlier this year, prompting the hashtag #JeSuisMilo among his supporters.

But claims that he had fanned the flames of the harassment of Ghostbusters actor Leslie Jones on Twitter led to a “permanent suspension” from Twitter on Wednesday.

Yiannopolous told breitbart.com his suspension was “cowardly”, and evidence that Twitter was a “no-go zone for conservatives”. “Like all acts of the totalitarian regressive left, this will blow up in their faces, netting me more adoring fans. We’re winning the culture war, and Twitter just shot themselves in the foot.

“This is the end for Twitter. Anyone who cares about free speech has been sent a clear message: you’re not welcome on Twitter.”

His supporters echoed his criticisms, prompting #FreeMilo to trend on the platform.

On Monday, Jones had started publicising some of the abuse she had received on the platform, much of it singling her out for being black and a woman.

After she made public pleas for Twitter to intervene, its chief executive, Jack Dorsey, asked her to make contact late on Monday night.

But she later appeared to quit the platform “with tears and a very sad heart”.

Yiannopoulos, who had written a scathing review of the Ghostbusters reboot, had been dismissive. “If at first you don’t succeed (because your work is terrible), play the victim,” he tweeted. “EVERYONE GETS HATE MAIL FFS.”

Before he was banned, he told right-wing website HeatStreet that, “of course” he had no regrets about his behaviour towards Jones. “But feminists, on the other hand, should have regrets that they have taught strong women that they are victims and attacked people for having different opinions to them on Twitter.”

A spokesman for Twitter spokesman said in a statement that “permanent suspension” was one of a number of steps that had been taken to address the uptick in offending accounts since Jones began rallying against her abusers.

“People should be able to express diverse opinions and beliefs on Twitter. But no one deserves to be subjected to targeted abuse online, and our rules prohibit inciting or engaging in the targeted abuse or harassment of others.”

The statement also addressed criticisms that the platform does not go far enough to protect its users, particularly women and people of colour.

“We know many people believe we have not done enough to curb this type of behaviour on Twitter. We agree. We are continuing to invest heavily in improving our tools and enforcement systems to better allow us to identify and take faster action on abuse as it’s happening and prevent repeat offenders.”

A review of Twitter’s “hateful conduct policy” was under way and would prohibit more types of abusive behaviour as well as allow more forms of reporting, “with the goal of reducing the burden on the person being targeted”.

More details on those changes were due in the coming weeks, said the spokesman.