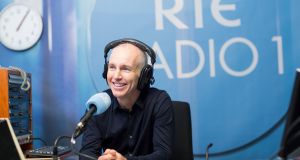 Ray D’Arcy: interview with former IRA member Shane Paul O’Doherty is a reminder of the inquisitive fizz of which he is capable

Ray D’Arcy is going through the motions, during his introductory spiel on Wednesday, when he briefly sounds a note of puzzlement. “What’s that?” he asks. “There’s a buzz in here.”

As it turns out the culprit is a ringing phone belonging to his producer and wife, Jenny Kelly. But such has been the prevailing flatness of The Ray D’Arcy Show (RTÉ Radio 1, weekdays) that the temptation is to say it’s the buzziest item the presenter has hosted for a long time.

But it’s not true. For those who feel that his RTÉ tenure has been a damp squib, this week suggests that D’Arcy still has some of his old spark. His interview with Elaine Clear, whose teenage son Dan took his own life in 2014, sees him strike the right balance between sensitivity and curiosity. Clear’s tale of how her sporty, popular son became overwhelmed by mental illness is difficult to listen to. She recounts, calmly and clearly, how he described his nocturnal anxiety in psychiatric hospital as like having rats scurrying under his bed.

D’Arcy is a comforting presence. “This is going to be tough for you,” he warns her. But at a time when harrowing accounts of suicide are an all too common feature of talk radio, D’Arcy’s interview looks at Dan’s death through a wider lens by examining the adolescent mental health system.

Clear explains that Dan’s hospital stay was ultimately counterproductive. “He didn’t think he’d be locked up,” she says. “He thought it would be an environment of gentleness and kindness.” She wants to make listeners aware that suicidal patients are often vulnerable after coming out of hospital care, a message that D’Arcy quietly emphasises.

If Elaine’s story brings out D’Arcy’s emotional awareness, his encounter with the former IRA member Shane Paul O’Doherty shows off a side of his on-air persona underused in recent times: his propensity for forcefully expressed moral bafflement. A teenage bomber who later forswore violence, O’Doherty has had an eventful life (it’s also the subject of a television documentary), but D’Arcy’s interaction with his guest is just as arresting.

He allows O’Doherty time to tell his story but doesn’t give him a free pass. When O’Doherty, who grew up in a middle-class family in Derry, talks about the powerlessness of northern Catholics in the 1960s, D’Arcy tartly says: “You weren’t disenfranchised.”

Later the host asks about a British woman injured by his guest’s letter bombs: “You tell me what happened.” When O’Doherty protests that he wasn’t there, D’Arcy presses him. “You must know by now,” he says. “She, like me, was blown up by a letter bomb,” comes the reply. “Yeah, but you were making a letter bomb.”

This exchange is actually fruitful, as O’Doherty then tries to explain, if not justify, his rationale at the time. The pair often talk at cross purposes, the host exploring the ethics of each incident, the guest trying to shift the focus to the bigger picture, but even this is instructive. It’s a bracing item, a reminder of the inquisitive fizz of which D’Arcy is capable.

Meanwhile, an exodus seems to be under way at Newstalk. The impending departure of the station’s top-rated presenter Ivan Yates is compounded by a dramatic announcement on Moncrieff (Newstalk, weekdays). “I want to get serious for a second,” Seán Moncrieff says on Tuesday. “This will actually be my last show on Newstalk.”

As it turns out the statement must be taken with the same pinch of salt normally reserved for George Hook’s serial promises to quit radio. His delivery growing ever more arch, Moncrieff says he’s made a terrible mistake, akin to the bank guarantee. “I said that Wonder Woman was a Marvel character, not a DC Comics character,” he says, his heightened contrition giving the game away.

Whatever momentary conniptions Moncrieff’s jape may cause among his audience, and indeed with Newstalk management, it also emphasises the blandness of the item that causes the initial mistake. The interview with Tim Hanley, author of a book about Superman’s girlfriend Lois Lane – both DC Comics characters, lest there be any confusion – is a listless affair, sorely testing the host’s trademark ability to sound interested in even the most frivolous topics.

Moncrieff’s questions become ever more perfunctory, and without a zingy subject to anchor him his wry style tips into facetiousness. The wonder is that, with a daily three-hour show filled with skittish items, this doesn’t happen more often.

As for Yates, news of his exit comes in a week when he underlines how he has helped make Breakfast (Newstalk, weekdays) his station’s biggest draw. As well as playing the grumpy realist to the idealist of his cohost, Chris Donoghue, he has an overlooked talent for getting the best from otherwise tricky guests.

Monday’s encounter with the former tánaiste Michael McDowell is a case in point. He can be a pugnacious interviewee, but, quizzed about his Seanad candidacy by Yates, he gives a spirited yet considered analysis of Ireland’s logjammed parliamentary system. The Dáil, he says, is a “bear pit” full of “Punch and Judy stuff”.

That said, it’s where Yates cut his teeth. With many former TDs now looking for work, a replacement might not be too hard to find.

Moment of the Week: Nocturnal confusion

For late-night listeners The Tom Dunne Show (Newstalk) is a reliable source of pleasing music and stimulating conversation about pop culture, as well as a source of good company in the form of the affable host. On Monday Dunne talks to the writer David Hepworth, whose new book claims that 1971 was rock music’s greatest year. It’s an entertaining conversation but a confusing one, too, when Dunne bids farewell to his guest. “David, a pleasure talking to you this morning,” the host says before correcting himself and adding, “this night”. At such times one wonders whether the Dunne we hear on air is a night owl or an early bird.

The Boys in the Band is theatrical, dated and utterly fabulous
5