Radio review: Golden oldie Hayes not really down with the kids 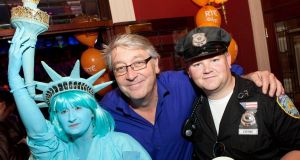 Noticing gardaí are getting younger is a classic sign of ageing, but a more lethally accurate barometer of advancing years is discovering the songs that soundtracked one’s youth are now classified as “classic hits” – or, worse, “golden oldies”. So the recent decree at 2FM to banish 1980s music from its playlists, on the basis that such material lacks appeal for younger listeners, will have come as a bitter blow to those of a certain vintage who still think of themselves as being “down with the kids”.

Notwithstanding the bruised feelings of superannuated adolescents, there is an undeniable logic to the decision, taken by the new station boss, Dan Healy. 2FM is, after all, pitched as a youth-oriented station. Squaring this policy with the station’s more conspicuously non-youthful presenters is trickier, however. For example, the more Colm Hayes (2FM, weekdays) tries to be with it, the more he sounds like a trendy dad making futile efforts to impress his children’s schoolfriends.

Prompted by the cut-price sale of the fading social network Bebo back to its founder, Hayes reminisced about the fleeting popularity of the website, which was set up in 2005. “It seems so much longer ago,” he said, with the affected wistfulness of a freshman undergraduate harking back to the halcyon days of the Junior Cert. He then played a track by 1990s boy band Five – not the most obvious bait for a fashionable young demographic – before commenting on the act’s archaic status: “I bet they had a Bebo account.” Take that, granddads!

Hayes, it should be noted, is not the only 2FM presenter whose age outstrips that of his coveted audience. When Ryan Tubridy recently celebrated his 40th birthday in extravagant on-air style, he was merely playing catch-up with daytime colleagues such as Hayes, Hector Ó hEochagáin, Rick O’Shea and the venerable Larry Gogan. But Hayes’s mission to woo the youth vote is further hampered by his show’s topical phone-in format.

Last Monday saw the presenter tackle the reliably contentious issue of racism, but the item was subdued, even flat. Most of the airtime was taken up with Hayes reading out texts, with several contributions suggesting metropolitan jibes at those from rural backgrounds – or vice versa – constituted racism. The few who phoned in were of white Irish or English backgrounds offering second-hand anecdotes of discrimination. Apart from a Polish texter who had returned home in frustration at a lack of job progress, there was little testimony from those who had actually endured such bias.

In somewhat troubling contrast, more people called in to Wednesday’s show with first-hand accounts of encounters with UFOs, though at least these were entertaining. Hayes spoke to Conor, a “certified Ufologist” whose inquisitive disposition was such that the one time he sighted such an object – a hovering “perfect circle of light”, which sounds suspiciously like the moon – he drove off before the UFO flew away. Talking to his guest, Hayes sounded unsure whether to adopt an air of knowing derision or credulous curiosity. That his show should career so wildly between the frivolous and portentous seems apposite for a station as uneven in tone as it is uncertain in direction.

It is possible to address issues such as racism in a fresh but illuminating way, as Derek Mooney (RTÉ Radio 1, weekdays) showed during his interview with Nigerian-born nurse and singer Maureen Aku Disu. Having sent a CD of her song Bloody Immigrants into the show, along with a frank letter about the obstacles she has encountered during her 11 years in Ireland, Aku Disu was invited on to discuss the matter.

Her signature song may have been more notable for its raw message and rousing delivery than any obvious musical genius, but she was an engaging presence. Being different in Ireland was not easy, she said: “Life has not been a walk in the park, with people coming up to me and telling me to go home.”

She was particularly perplexed at being simultaneously accused of taking Irish jobs and living off welfare. But Aku Disu was also frank about the difficulties in Nigeria, from religious strife and corruption to the inter-communal suspicion she met when she fell for a man from a different tribe. She even offered a glimpse into the shadowy mechanics of getting into Ireland from Nigeria, candidly admitting that she had to pay people to smuggle her in.

Throughout their chat, Mooney was by turns sensitively attuned and gormlessly enthusiastic. When he asked his guest, who is now an Irish citizen, whether her friends were of Nigerian origin, he pulled himself up lest he seem to be racially profiling people: “That’s stupid, they are Irish, that’s my own ignorance.”

But when Aku Disu said there was little racism towards foreigners in Nigeria, Mooney’s response was toe-curling. “If I was there, would people want to touch my skin?” he asked with a giggle. “Get me on that flight.”

That Aku Disu did not take offence spoke volumes about her sparky demeanour although, to Mooney’s credit, he had by then conjured up a rapport with her. As a result, a compelling story emerged, combining human interest with wider, thought-provoking ramifications. All this plus new music. Perhaps she should be on 2FM.