Radio: No pain, no gain as Ian Dempsey looks to create a buzz

Review: Today FM host endures tattooist’s needle as a troubled friendship plays out on 'Off the Ball' 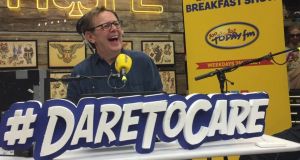 You don’t get to host a breakfast show for nearly two decades in the fickle world of popular commercial radio without knowing how to create an on-air buzz. Even so, veteran presenter Ian Dempsey maybe takes things a little too far on Tuesday’s edition of his long-running programme (The Ian Dempsey Show, Today FM, weekdays) when he, well, creates an on-air buzz.

Actually, it sounds more like a hum, of the aural rather than metaphorical variety. As he introduces songs and chats with the various character incarnations of Mario Rosenstock, Dempsey’s patter is accompanied by a low droning noise. This, it turns out, is not some unexpected wireless interference, but rather the sound of a tattoo machine leaving its mark on the presenter.

Perhaps inevitably, Dempsey is undertaking this wheeze for charity, namely Today FM’s Dare to Care campaign for the Irish Cancer Society. And as a philanthropic enterprise, it succeeds admirably, raising €35,000. More pertinently (for the purposes of this column anyway), it makes for joyful listening.

Dempsey may disagree. Broadcasting from a tattoo studio in Cork, he cannot hide his nervousness as he waits for his skin to be inked by artist Ross Nagle. When the machine starts to thrum, he says, “Right, I’m off”. It’s not clear if he’s joking.

Thankfully, Dempsey stays put and even attempts to carry on presenting the show as usual, with little success. The presenter’s voice rises and falls comically as he reads out competition rules, interjecting the occasional “woah” for good measure.

It’s an unusual show, but it underlines what a consistent presence Dempsey normally is in the morning. Eighteen-odd years after starting the Today FM programme, he still projects a breezy good humour in the morning, conducting every interaction with a disarming affability. True, his banter and music formula hardly rewrites the format, while he occasionally strays into jock-speak: he calls Debbie, who had the idea of him getting a tattoo, a “classy woman”.

Still, Dempsey’s ability to maintain his easygoing persona when a needle is repeatedly puncturing his skin is a reminder why his show remains an oasis of good cheer amidst morning airwaves otherwise populated by grim news and Marty Whelan. As for Dempsey’s tattoo, it’s a black star, inspired by David Bowie’s final album of the same name. But it’s a stellar performance from Dempsey.

“Breezy” and “easygoing” aren’t tags one associates with sports journalist Paul Kimmage, whose unrelenting pursuit of drug cheats such as Lance Armstrong is testament to his terrier-like personality. But as his appearance on Sunday’s edition of Off the Ball (Newstalk, daily) attests, Kimmage’s determination and integrity can get in the way of old friendships.

Whereas Walsh had previously declared Team Sky clean, he now asks questions, which irks Kimmage, a former professional cyclist who has long harboured doubts about the team. As Kimmage details his qualms, he also alludes – in starkly candid terms – to the decline of his long friendship with Walsh over the issue.

As his guest talks about having “screaming matches” with Walsh, Molloy sounds genuinely concerned about the personal ramifications of all this.

“I’ll tell you what’s personal, Joe. My love for this sport is personal,” Kimmage says. When Molloy wonders whether this is a “nail in the coffin” of the friendship between the men, Kimmage’s answer is unequivocal: “Ah, no, the relationship is dead.”

Molloy moves the conversation to O’Toole who, as a former whistleblower himself, has profound doubts about Wiggins and drugs in sport. But he is clearly uncomfortable with the turn the conversation has taken.

To his credit, Kimmage knows his unyielding stance causes fallout: “I may be an asshole, but I’m a consistent asshole.” It’s a startling item, compelling if voyeuristic in its honesty. After that, it would take a brave person to suggest that, perhaps, it’s only a game.

Radio doesn’t need acrimony to attract the attention. Sometimes the sounds can be sweet. Flicking through the dial from one talk show to another on Monday morning, the air is suddenly filled with the unexpected sound of Grooving with Mr G, a bubbling 1971 track by American organist Richard “Groove” Holmes.

The tune sounds incongruous amid the preprogrammed landscape of daytime radio, but it is followed by equally unlikely tracks from such relatively obscure jazz and soul artists as Jimmy McGriff and Truman Thomas. All linked together, as Gaeilge, by Billy O Hanluain, the enthusiastic presenter of An Nóta Gorm (Raidió na Life, Sunday and Monday).

As it turns out, this gem of a show on Dublin’s Irish-language station is a repeat of an old edition focusing on the “soul jazz” genre. (O Hanluain takes a different jazz theme each week.) But it’s a reminder of how a presenter who cares about music – be it 2FM’s Dan Hegarty, Raidió na Gaeltachta’s Cian Ó Cíobháin, Lyric FM’s John Kelly and Ellen Cranitch, or O Hanluain and many others – can stop a listener in their tracks with a well-chosen tune. Creating a buzz doesn’t have to hurt.

Those wondering why Ryan Tubridy (RTÉ Radio 1, weekdays) goes awol on Tuesday (he’s replaced by a jet-lagged Dave Fanning) get their answer the following day, when the presenter explains he was in London attending a memorial for the late Terry Wogan at Westminster Abbey. Tubridy, a friend of Wogan who was influenced by his style, sounds moved as he recounts the service.

It is slightly undone when he plays a clip of Joanna Lumley reading a poem at the service. Called For the Former Greatest Living Irishman, it’s even more cloying than its title suggests. Tubridy’s obvious affection is a better tribute to the much-missed broadcaster.