‘People died so we could watch Irish celebrities on Dancing with the Stars?’ 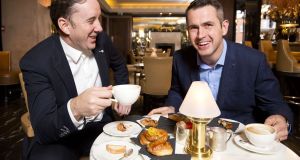 The days are getting longer and the shift to summer time beckons, but if the snoozy content of last week’s radio is anything to go by, the old mnemonic about changing the clocks needs adjusting to “spring forward, fall asleep”. It’s not that the subject matter is boring – though by now Brexit fatigue is surely a medically-recognised condition – rather that the topic of sleep dominates the airwaves.

Morning Ireland (RTÉ Radio 1, weekdays) sets the tone, with Wednesday’s item on the EU decision to abolish seasonal clock changes. “An extra hour in bed or summer time all the time, which would you choose?” asks anchor Audrey Carville. Her guest, “sleep consultant” Lucy Wolfe, prefers the latter option, on the grounds that it “doesn’t cause as much disruption to the body clock”. But Wolfe is happy so long as it remains summer or winter time all year, as the disruption to our circadian rhythms caused by the bi-annual adjustment can last for up to 10 days.

Not that the clocks have to change to cause confusion. Carville’s co-anchor, Rachael English, sounds like she could do with a bit longer in bed when she opens the show in stumbling fashion. “Good morning, it’s . . . seven o’clock on . . .” she says haltingly, before stopping altogether. “Better if I have the introduction,” English then explains with a self-deprecating chuckle, before starting again. That she manages to stay awake and alert during subsequent items on the Groundhog Day machinations in Westminster underlines the fleeting nature of her opening gaffe.

Her rivals over on Newstalk would doubtless sympathise with her early-morning fogginess. Kieran Cuddihy, presenter of Newstalk Breakfast (weekdays), has a deceptively upbeat air on Tuesday as he launches a “sleep survey” commissioned by the station. “We love these on the breakfast show,” he says, “because we don’t get enough sleep.” In case listeners miss the point, co-host Shane Coleman chips in, “We never get enough sleep”.

Since Cuddihy’s appointment, it sounds more like a serious news magazine

As the pair analyse the survey, their resentment about curtailments to their repose reaches alarming levels. On learning that “bed discomfort” is apparently the number one reason for bad sleep, Cuddihy is dismissive: “Get a new bed.” He suggests that children present a far greater obstacle to a good night’s rest. His co-host heartily concurs. “What did Philip Larkin say? ‘They eff you up, your mum and dad’. What do kids do to your sleep?” asks Coleman, in unconvincingly jokey manner.

For all that, the partnership of Coleman and Cuddihy is proving a dream team, bringing fresh impetus to Newstalk’s morning show. While the setpieces between Coleman and previous co-anchor Paul Williams were diverting, too often the programme resembled an opinionated peanut gallery. Since Cuddihy’s appointment, it sounds more like a serious news magazine. The presenters still indulge in de rigueur banter, but Cuddihy has a lighter touch than his heavy-handed predecessor.

Faced with preposterous statements, Cuddihy favours the raised eyebrow, such as when Larry Bass, whose production company Shinawil makes RTÉ’s hit show Dancing with the Stars, pleads for an increase in the television licence fee.

“People died in this country when they were setting up the State to protect our culture,” says Bass.

“People died so we could watch Irish celebrities on Dancing with the Stars?” replies the wryly incredulous host.

But Cuddihy can moderate his tone as the occasion demands. On Wednesday, he speaks to Hilary Murphy, whose 16-year-old daughter Katie was killed by a careless driver in 2016. Following a 14-month prison term for the driver, Katie’s father says he is “very happy” with the sentence. “We believe the only way to stop this kind of bad driving is to hand out custodial sentences,” he says.

There is no joy to be heard, however, only grief. When Cuddihy asks his guest to talk about Katie, Murphy calls her “the most wonderful daughter that anyone could ask for”, recalling how they would go for lunch. “Then all of a sudden she was gone,” he says.

Murphy paints a bleak picture of his family life now. “Every morning when you wake up, the very first thing that comes into your head is, ‘Katie’s gone’.” He relies on medication to get to sleep, he says, and sometimes to get through the day: “We don’t have a life any more.”

Cuddihy, who has been an understated presence throughout, remarks to his guest that while some bereaved families say that life eventually moves on, “It kind of sounds, if you don’t mind me saying, that it hasn’t for you”. Murphy agrees.

In other settings, listening to such anguished honesty might seem voyeuristic, but here it vividly highlights the catastrophic consequences of reckless driving. Murphy cannot hide his disdain for any driver who speeds to gain a couple of minutes: “Just behave yourself.”

It’s a stark piece of radio, but as a wake-up call, it’s essential.

Meanwhile, Newstalk’s “sleep week” continues on Lunchtime Live (Newstalk, weekdays), as host Ciara Kelly asks behavioural therapist Deirdre McSwiney why so many of us feel tired. “I don’t want to make this about me,” says Kelly, before doing just that. The host describes her nightly sleeping patterns, asks if her Netflix habit affects her slumber and confesses in mock-shame to keeping a phone under her pillow. In fact, Kelly makes the conversation about herself so much that her guest’s advice gets lost amid the solipsistic detail.

There’s a bit less self-absorption when Kelly talks to former Fianna Fáil minister Mary O’Rourke about the chances of history being restored as a core Junior Certificate subject. The reliably loquacious O’Rourke, who once taught history, thinks the subject is necessary “to know how we came about as an island nation”.

Kelly, however, thinks history provides valuable parallels between the past and our own uncertain present. If history isn’t properly taught, she says, “My fear is the little people will be manipulated”. Wait, what?

Still, it’s reassuring to hear Kelly speak passionately about the subject, even if her grasp of detail sometimes seems shaky. “King Henry got married and had seven wives,” she says, only out by one. Maybe she was dozing during that particular lesson.

On Wednesday, independent Kerry TD Danny Healy-Rae makes a reliably eccentric appearance on the Pat Kenny Show (Newstalk), asking for the army to send in sharpshooters to cull deer from Killarney National Park which, he says, have become “a real danger”, causing traffic accidents. “People should be entitled to drive safely,” he says. Fair enough, but when Kenny notes that Healy-Rae has also spoken against more stringent drink-driving limits, his guest sounds outraged. “I never condoned drunk driving,” he says, but says “a person having two pints is well capable of driving and has never caused a fatality. And I will stand by that for the rest of my days”. Deer, oh deer.