Helen Behan: I had impostor syndrome at the start, now I’m like a giddy child 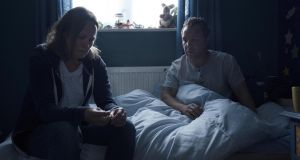 Helen Behan and Stephen Graham in Shane Meadows’s The Virtues.

Writer and director Shane Meadows is a little too good at his job. Thirteen years since the release of the Bafta-winning film This Is England, the drama centred around a gang of impressionable friends divided when a fascist thug played by Stephen Graham slips into their group, I still flinch when I see Graham on screen.

Graham might have played a broad range of characters since – a softer version of this character in This Is England’s three subsequent TV series, Al Capone in Boardwalk Empire, DS John Corbett in Line of Duty, and now a lost soul coming to terms with his dark past in Ireland in Meadows’ newest production of The Virtues – but his convincing characterisation of the violent skinhead is burned into my brain. Unhelpful for me, especially as there seems to be no stopping Graham these days, but it speaks volumes about the visceral worlds that Meadows creates.

The Virtues is a departure in subject rather than style. Moving away from the This Is England lineage, it centres around the estranged dad-of-one Joseph, played by Graham. Struggling with life in Liverpool, he returns to his childhood home in the fictional Ballybraigh in Co Louth and reunites with his sister Anna, played by Helen Behan, meeting her new family, and finally facing up to the demons of his past.

Joining forces once again with co-writer Jack Thorne, the hallmarks of Meadows are all there at their very best: grittiness, fully-formed characters, realistic depictions and artful, organic direction. Music is provided by PJ Harvey. It combines to make for one cinematic piece of television, its intensity compounded by the fact that Meadows drew on his own experience sexual abuse as a child, and that it was in production as his mother passed away.

While mostly filmed in Belfast, Liverpool and Sheffield, an Irish cast appears in earnest. There’s rising star Niamh Algar as Joe’s troubled sister-in-law, Frank Laverty (Glenroe, Michael Collins) as Anna’s husband, and Mark O’Halloran (Adam & Paul) as an acquaintance from the boys’ home in which he was raised, who knows his past.

All the actors give memorable performances, but Behan, who we might recognise from Taken Down if not her roles in This Is England 88 and 90, is responsible for one of the most emotionally charged scenes we’re likely to see this year, as Anna painfully reunites with Joe later in the series. It’s all the more impressive given she hadn’t trained as an actor, and still works as a locum nurse around Co Louth.

“Nursing definitely isn’t as glamorous,” she says from her home in Bettystown, which she shares with her partner and their four children. “It took a while to get used to being on set, with people running after you and making you tea. I remember when I first started acting, in This Is England 88, I left my handbag in the trailer, and when I copped it just as we were about to shoot a scene, someone talked into their jumper, and they brought my handbag down to the set. I said to myself, ‘Jesus, take stock, this is not the real world’.

“When I came home from shoots, my husband used to tell me I was a prick because I’d come home from that bubble. I’d be like ‘where’s my gym gear?’ ‘what’s for dinner’ and it took me a while after jobs to not be a prick,” she says, though I feel she’s not entirely serious; throughout our conversation, there’s a recurring theme of gratitude that sits at odds with this alleged characteristic. Indeed, she continues: “You can’t go around thinking you’re the s**t because you’ve got dishes to wash. Real life continues on. The bubble is lovely but it’s temporary, so you have to be yourself.”

Perhaps Behan’s level-headedness is because she got into the profession in her thirties. Growing up with a “regular seaside town existence” in Laystown, Co Meath, as one of eight children, she saw her love of acting as a flight of fancy, and didn’t pursue it seriously until a chance meeting with Meadows at her local pub led to the part in This Is England 88.

“I wrote my details down on a till receipt because I’d no paper, and I watched him carefully tuck it in his wallet,” she recalls. “I saw that he was taking care of it, but I didn’t want to think anything would pan out.”

In fact it led to her first audition taking place with no less than the award-winning Meadows and Vicky McClure (also of Line of Duty stock) as Lol, which earned Behan the role of Lol’s counsel, helpfully characterised as an Irish nurse.

“Shane told me in the beginning to trust him, so I knew to,” Behan says. “He’s not scary at all, you know the way different directors can be. We had great craic that first night in the pub, and that’s how our relationship continued afterwards. I felt totally at ease with him, and it was the same with Vicky. On that first job, as petrified as I was, I got into the flow. I wanted to make him proud of the work we were doing, and show he was right to take a chance on me.”

After, Behan moved to other projects like performing one of Jennifer Johnston’s Three Monologues in Derry in 2013, when it was the City of Culture. She played the mother in the bungled tiger kidnapping in the fourth season of Love/Hate, directed by David Caffrey, whom she met again for its televisual cousin, Taken Down. And she also reprised her original role in This Is England 90. But between these, there were some inevitable rejections.

“By the time you’re 40, you’re relatively comfortable in your skin,” she says. “So if you’re trying out a new thing and someone says ‘no thank you’, if you want to survive you have to dust yourself off, think about what you’ve learned from it, and move on. Auditioning is something you can only perfect having done it a lot, because it’s hard to showcase what you can do in a minute and a half.”

Understanding her aptitude first-hand, Meadows wrote the role of Anna with Behan in mind. It meant that while much of the cast finessed their characters and the script during many hours of workshopping at The Virtues HQ, a disused school outside Sheffield, her character was already moulded to her when production began last year.

I was constantly waiting for someone to tap my shoulder and say, ‘come on, you’ve been found out’

There are some great moments with Anna once she appears in the second episode, like when she plays mum to her three young children – Aisling Glenholmes, Zach Humston and Conor McEnaney – all of whom deliver remarkably natural performances. But the aforementioned scene with Stephen Graham in which they talk through their lost years is the stand-out – everything from the time it’s allowed to the un-self-conscious performance of the two actors make it a startlingly intimate scene.

“I was petrified about it when I first read the script,” says Behan. “I knew that Stephen Graham is a master of his craft, so I was apprehensive if I could hold my own with him. That was quickly answered at rehearsals, because we gelled, and I knew everything was going to be okay.

“On the day of the scene, there was total quiet from the crew. There was an overwhelming sensation that something very big was happening, I don’t know how to describe it.

“Stephen and I knew where we were headed but we hadn’t run through it or didn’t map it out. We wanted to let it naturally wander where it wanted to go. It was done in one take, and whisked away for the edit that night. What’s shown is pretty much as it was on the day.”

If the performance raises her profile, Behan is ready for the challenge. She’s already wrapped a part in forthcoming film Wildfire, directed by Cathy Brady (Can’t Cope Won’t Cope) and starring Nora-Jane Noonan (The Magdalene Sisters) and Nika McGuigan (The Secret Scripture) – coincidentally, also about separated Irish siblings whose reunion rustles up secrets from their past.

“I feel more comfortable with acting now,” Behan says, reflecting on her time in the business. “When I started I did have impostor syndrome. I came in through the back door, and I was constantly waiting for someone to tap my shoulder and say, ‘come on, you’ve been found out’. I’m happy that it didn’t happen. Then when you have someone like Shane telling you you’re doing a great job, you start to believe it. Then you want to do a better job. So I’m like a giddy child, I cannot wait. This has boosted my confidence in my ability, and it’s given me an unquenchable thirst to keep driving for honest performances. Whatever comes my way now, I’m ready.”

The Virtues begins on Channel 4 at 9pm on Wednesday 15th May.