O’Casey In The Estate spins a powerfully human story 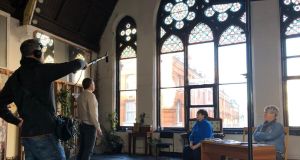 Even if you’re a bit fuzzy regarding Seán O’Casey and why he matters, O’Casey In The Estate (RTÉ One, Thursday) is a treat. More than that it’s a balm, with its languid panning shots of the Dublin Docklands and footage of narrator Liam Cunningham rambling through the byways of his childhood.

There isn’t much sunshine in this beguiling serving of slow TV. Indeed the sky at moments appears to be stooping in upon the Game of Thrones actor (whose accent bends towards his Dublin roots as he chats to locals). But the waters of the Liffey glimmer, dazzling and tranquil. And just the sight of a pre-lockdown Dublin carries its own sort of ache. This is how it used to be. Please, can it be that way again?

O’Casey In The Estate is reality television but only just. And thank heavens for that. Instead of exploitative melodrama it’s a meditation on community and adversity. And also on the eternal truths of O’Casey’s work.

The grand conceit is that the Abbey Theatre is putting on a production of the Plough and the Stars with a cast of locals from O’Casey’s native East Wall. In less sensitive hands, this could have resulted in a bacchanalia of class tourism. Can you imagine what Channel 4 would do with the format?

Here, the tentative thesps are presented as human beings rather than archetypes. After substance abuse and gambling problems, Anto Seery was encouraged to try acting by his father- now departed but honoured in a shrine in Anto’s home.

Then there is Rebecca Duff, a recent drama graduate. She lives with her grandmother and aunt - with a growing younger sister, there isn’t enough room for her at home. The only premature departee - so far - is cancer survivor Raymond McLoughlin. He seems earnest about the project but phlegmatic too: when Abbey director Caitríona McLaughlin announces he won’t be continuing it isn’t quite a bombshell.

Cunningham brings some personal perspective and his passion for the East Wall is communicated powerfully. As is his fear that new developments will rob the area of its character. But he doesn’t lay it on excessively

Nor does O’Casey In The Estate go overboard banging on about the Plough and the Stars and why it’s a Big Deal. This is smart as it brings the striving actors into focus and positions to play in the background. Arts shows on RTÉ often feel designed to indoctrinate you into a cult of metropolitan luvviedom. O’Casey In The Estate avoids this familiar pitfall and instead spins a powerfully human story.