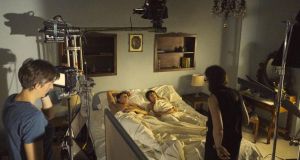 In 2016 HBO issued copyright notices to adult websites over pirated sex scenes from Game of Thrones.

Normal People, based on the bestselling novel by the Irish writer Sally Rooney, has proved a TV hit during lockdown. Starring Daisy Edgar-Jones and Paul Mescal, the 12-part drama tells the story of Marianne and Connell, whose secret high-school romance goes on to define their adult lives.

RTÉ received 50 complaints about the sex scenes in the series. Lenny Abrahamson, who directed the series with Hettie Macdonald, has defended the scenes in an interview with the broadcaster, emphasising their “positive aspects”, and adding that they had been filmed “very sensitively”.

The show’s intimacy co-ordinator, Ita O’Brien, described the “delicacy, the beauty, the openness of this incredible, something-other relationship. It was crucial for me to honour Sally’s writing. There is nothing gratuitous.” – Guardian