Despite the lack of specifics, one thing is clear: Season 7 ain’t gonna be pretty

The latest trailer for the highly anticipated seventh season of hit television show 'Game of Thrones' has been released. Video: HBO 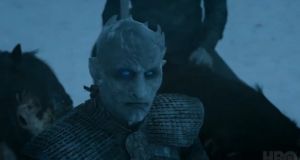 Game of Thrones Season 7 will air on Sky Atlantic on July 17th.

The latest trailer for the seventh season of Game of Thrones teases us with impending blood shed and barbarity.

There is nothing quite like the sound of Petyr Baelish hissing in Sansa Stark’s ear to make the hair stand on the back of your neck (not in a good way), which is how the trailer starts.

He tells her “don’t fight in the North, or the South. Fight every battle, everywhere. Always. In your mind” – which is really sod all good to those of us hoping for some clues – or even full sentences.

The gates of the Wall open and we see Jon Snow – whose lovely hair is all crusty with ice – looking perished with a few mates.

Might he be with his brother Bran Stark, who had ventured north of the wall to learn from the three-eyed raven?

Cersei is seen alive and well after blowing the Sept in King’s Landing to bits and ordering the torture of Septa Unella in the last episode of the previous season.

We then see that Daenerys Targaryen has made it as far as the table at Dragonstone (where Stannis and the Red Lady used to concont their mad plans), Arya is riding a horse and Tyrion looks contemplative on a mountain.

Not a whole pile of specifics there, but the final montage of angry dragons, fleets of ships and armies launching flaming arrows, storming gates and running through fire tells us one thing: this ain’t gonna be pretty.

Epic battles, the destruction of cities and the loss of countless lives is inevitable in this season.

It ends with Sansa’s warning:

“When the snows fall and the white winds blow, the lone wolf dies but the pack survives”.

Game of Thrones Season 7 will air on Sky Atlantic on July 17th.